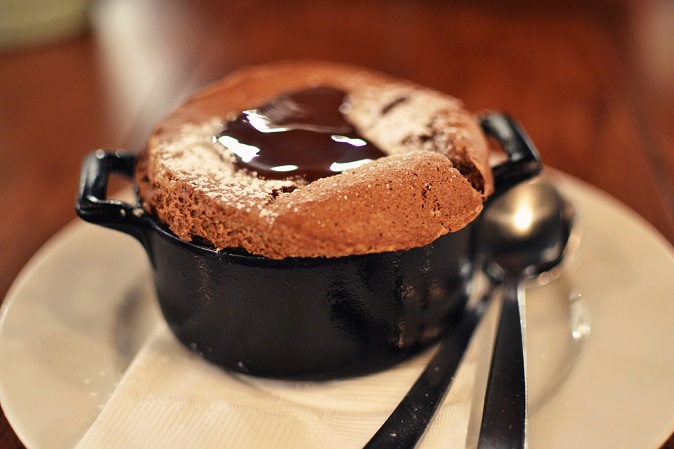 NUTELLA RECIPE: A good Soufflé is incredibly difficult to make, or at least that’s what people think. Personally, I think Soufflés are the easiest recipe because it hardly requires any prep and consistently turns out delicious. Even when it sucks... cume on... you never throw it away!

I used to make this recipe at home all the time for big events like sunny days, clean underwears in my drawers or finding non expired food in my fridge!

Most people say you have to be exceptionally delicate with soufflés, but this recipe is pretty foolproof. Sometimes I would even break the cardinal rule of soufflés and crack the oven open an inch to take a peak, but they would always turn out heavenly, especially topped with whipped cream.

Top these Souffles with a strawberry and you are gonna get laid on Valentine’s Day... even if you have crewed it up few days earlier! ;)

Soufflés are one of those dishes that sound fancy and intimidating, but they’re actually not too difficult. Best of all, they can be made ahead of time, so come dessert, it won’t matter if you’re a bottle of wine in, all you have to do is turn on the oven and pop them in... plus, you can't really fit a bottle of wine into a souffle, can you?

This particular soufflé recipe goes the extra mile with homemade Nutella as the main ingredient.

I made my first batch of this heavenly chocolate-hazelnut spread last Christmas, three times last month, twice this week, once again today, and I must say, it has changed my life. Perfect if you are constipated. Hot melting chocolate fixed all level of constipation! ( You've heard it from me! ) :D

I’m always looking for an excuse to put my homemade Nutella to use, and not beng able to go to the toilet for almonst a week was a good occasion as any.

I melted it together with a bit of cream and stirred in an egg yolk to make the base for the soufflé. To that, simply fold in egg whites that have been beaten to a firm peaks... blah blah blah... done! Toilet after 10 minutes! Awesome!

03 - Sprinkle the bottom and sides of the ramekins with some Sugar and remove any extra.

04 - In a bowl, combine the Nutella with the Egg Yolks. Set aside.

05 - Into another bowl, using an electric mixed at medium speed, beat the Egg Whites with a pinch of Salt ( and the Cream of Tarter ), for 4 minutes or until well combined and the mixture is able to hold soft peaks.

06 - Slowly, while still beating the mixture ( for an extra 2 minutes ), add the Sugar.

07 - Pour about one third of the Egg Whites into the Nutella / Yolks mixture, and stir to combine.

08 - Now, pour the Nutella mixture into the remaining Egg Whites and fold until thoroughly combined.

09 - Divide the mixture between the ramekins and bake them for 15 to 17 minutes or until they have puffed up but still have a little giggle in the center. Serve.

- You can use Cocoa Powder instead of Sugar in Direction 3.

- If the Nutella is too hard, microwave it for 1 minute.

- Don’t over-beat your egg whites. This is easy to do, especially if you’re using an electric mixer. You’ll know you’ve gone too far if you see the egg whites starting to look a little curdled and watery looking. Your egg whites should be like smooth airy clouds with a nice sheen to them.

- A spoonful of sugar. Don’t skip the sugar in the egg whites. It helps stabilize the whites, helping to prevent that pesky over-beating factor. Besides, now is not the time to be thinking about sugar intake. Live a little.

- Fold gently. You don’t want to deflate all those air bubbles you worked so hard to create. Also, as you’re folding, be sure you’re scraping the bottom of the bowl too, not just the sides.

- No peeking. One of the biggest mistakes people make when it comes to soufflés is opening the oven door too often to check on them. Every time you open the oven, the temperature in there drops, and soufflés don’t like that. Try to check just once, when you think they’re close to done, and make it fast.

- Don’t use convection setting. The air flow is too disruptive and you may end up with the leaning tower of soufflé.

- Don’t dawdle. Soufflés wait for no one. Have your plates and garnishes ready and serve quickly because your dramatic soufflé will start to deflate as it cools.