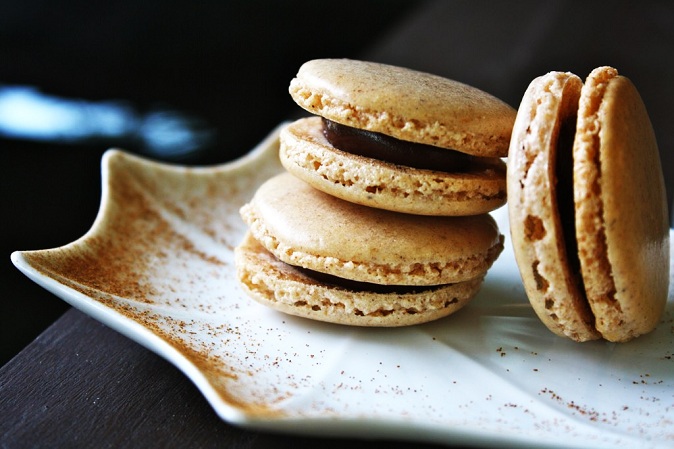 NUTELLA RECIPE: There are two different variations of macaroons; French and American. American macaroons are usually coconut based, sometimes dipped in chocolate and are delicious. French macarons are light and crunchy but with a soft interior.

We focus on the french ones, which is the best option to hold the Nutella in between. That's all.

I've been living in London half of my life, every weekend I used to go exploring caffee shops and restaurants. Every Sunday I would visit a different place. One of my favorite place was an Organic Coffee Shop in Hampstead Heat which had the most amazing macarons.

I was always thrilled to eat them there!

I have yet to find classic American macarons. I think i will have to create them myself when the craving hits!

French macarons have very few ingredients but are very dependent on weather and ingredient temperature to come out correctly, a dry cool day and or kitchen is important.

Following a few simple rules will result in a beautiful macaroon, perfect for holiday parties and gift giving!

02 - Into a large bowl mix well the Almond Meal, Icing Sugar and Cocoa.

03 - Pour 1 portion of Egg Whites, Coffee and Vanilla over the Almond Meal mixture without mixing and set aside.

04 - In a saucepan, put the Caster Sugar and Water and stir well. Place over a medium heat. When the Sugar reacher 120C / 248F turn off the heat.

05 - Very quickly, using another bowl and an electric mixer, mix the remaining portion of Egg Whites at high speed until they form very soft peaks.

06 - While the Egg Whites are being beaten at high speed, pour the sugar syrup in, very slowly and continue to beat until the mixture cools.

07 - Now, fold this mixture into the Almond Meal mixture until well incorporated and smooth.

08 - Spoon everything into a piping bag fitted with medium round nozzle and pipe small 1 inch rounds of mixture onto the lined trays, allowing a little room for spreading. And start squeezing the Macarons on the tray.

09 - Set the trays of macarons aside for about 30 minutes so they can develop a thin skin.

11 - Bake the Macarons for about 12 minutes, opening the door at the 8 minute mark and the 10 minute mark, letting out excessive steam. When they over-grow and you can gently lift one off the tray without leaving anything behind, they are ready.

13 - Heat the chopped Chocolate and Nutella until the Chocolate is melted and incorporated with the Nutella.

15 - Let the Nutella Cream cool in the fridge for a while, until it becomes firm.

16 - Pour the Nutella Cream into a piping bag fitted with a medium round nozzle.

17 - Sandwich everything together. Serve.