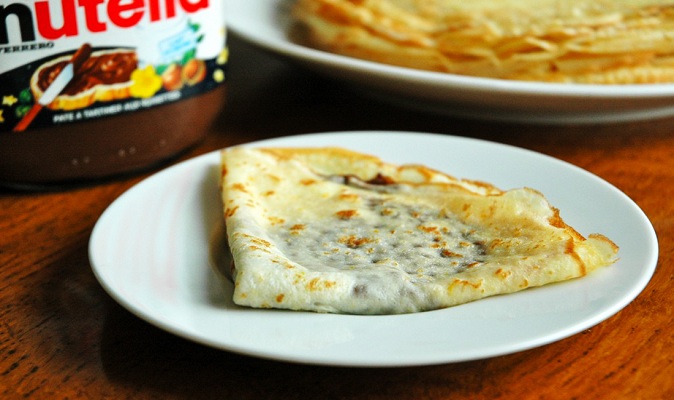 NUTELLA RECIPE: Crepe stands are as prevalent in Paris as doughnut shops are in America.

Batter is poured onto a griddle and spread thin with a wooden tool called a rateau. The crepe bubbles and then settles and turns golden brown.

Once hard to find, Nutella is now available in most supermarkets, anywhere around the world. One of life's simple pleasures!

On a gray days, I get nostalgic of Paris. I've been to Paris only once. Believe it or not, i went there ONLY to eat crepes. I booked a Rainair flight ( company that hate and will never use again ) and went.

There are so many things I love about that beautiful city, and admittedly, many of them are food-related. A perfectly ripe apricot at a summertime market i've never eaten. A flaky croissant from Poujauran, which i've never even heard. A still-warm baguette l’ancien from Jean Millet ( well worth the wait in line... which i didn't ). A glass of bubbly on the terrace at Le Fumoir... i don't even drink. A whimsically flavored–and perfectly executed–macaron from Pierre Hermé, which i truly hate.

Perhaps my favorite thing of all, however, is a 3 Euro takeout treat found all over Paris: a piping hot crêpe oozing with Nutella.

After extensive taste-testing, however, I have realized that a crêpe is not a crêpe. There are the crêpes that are too dry, too soggy, that skimp on the Nutella, or–worst of all–the crêpes that are made in advance and and sit in a limp pile for hours, merely reheated when you order.

It turned out Paris sucks for Crepes.

I’ve found perfection only once, in my friend's kitchen.

A couple of things set their crêpes apart:
1) they brown their crêpes just long enough for them to remain slightly crisp on the outside. Being a sucker for texture, I love the contrast between the crisp exterior and the creamy hazelnut filling.
2) They have a secret ingredient in their batter: sucre vanille. These little packets of vanilla sugar are sold all over France and are often used in baked goods, giving it an extra vanilla boost. I’ve bought vanilla sugar in France to make the recipe at home, but if you can’t find it, you can substitute vanilla extract.
3) They have achieved the perfect Nutella-to-crêpe ratio. As in, they smooth the Nutella evenly over half the crêpe, so you get an equal spread of Nutella on every single bite.

Nutella is clearly my favorite filling, but they also have other delicious options. One of those is a hot crepe with some cold milk ice cream on top.

And on the savory side, they’ve got all manner of hearty gallettes, the traditional Breton pancakes made with buckwheat flour. Ham, cheese, and egg is a classic, but I love their goat cheese and spinach gallette for a light lunch.

Crêpes are great party food–make a stack as people arrive and lay out a variety of toppings so everyone can assemble their own dessert. Your friends will definitely be impressed that you made them from scratch! Though the recipe below is for dessert crepes, be sure to try my recipe for buckwheat galettes so you can experiment with savory fillings as well. Bon appetit!

02 - Pour the Milk in while whisking the mixture. Mix untill you break all the lumps.

03 - Once the Flour and the Milk are well combined, in a second bowl, beat the 3 Eggs together.

04 - Add the Eggs to the Flour and Milk mixture.

05 - Cover the mixture with a clean tea towel and let it rest in a cool place for about a 15 minutes at room temperature.

08 - Pour some Batter in the centre of the pan, lift and rotate it to spread the Batter evenly over the entire surface of the pan, and wait till it dries and turn brown.

09 - Using a long thin spatula, turn the Crepe on the other side.

10 - Once both sides of the Crepe are brownish, move it to a plate and top with nutella.

- Make sure you use all the Batter. Check the date of the Eggs you have used, and if you can, store the Batter in the fridge, in a sealed container, for a day.