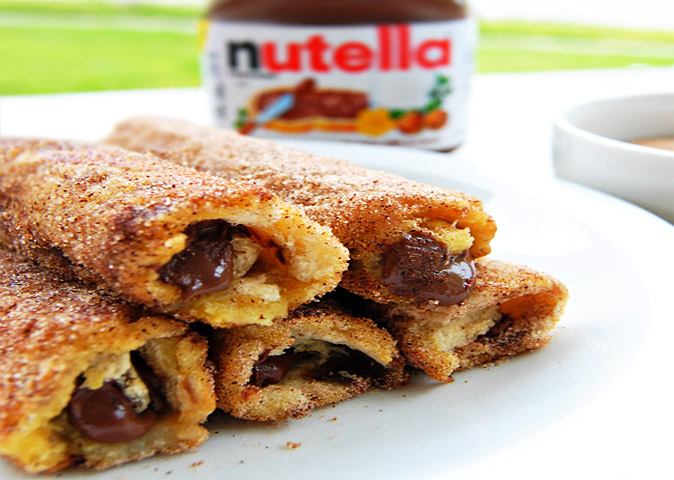 NUTELLA RECIPE: I'm always suspicious of frying things up. I'm not a great fan of it. Especially then you eat fried foods away from home, where frying oil may not be fresh, posed the greatest risk.

In fact with each reuse, oil becomes more degraded, and more gets absorbed into food, which can contribute to weight gain, higher cholesterol, and higher blood pressure and in some cases, where processed or red meat is involved, cancer.

When i first decided to cook this recipe it was a crazy time of the year and nothing was never that quiet.

It's sort of one of those wow recipes that requires absolutely no effort or skill in anyway, and has people wondering how you made it. Once the secret is out however it's a no-brainer. It's so easy and so delicious, you wont be able to stop at one.

Here we have nutella filled french toast rolls coated in a delicious golden layer of cinnamon sugar. Imagine them oozing with honey or strawberry jam? Talk about the perfect breakfast in bed!

01 - Remove the crusts from the Slices of Bread.

02 - Flatten each slice of bread with a rolling pin.

03 - Spread 1 tablespoon of Nutella on one side of the flattened Slices of Bread.

04 - Roll the bread up tightly, placing the open side down.

05 - In a bowl, whisk Egg and Milk together until well combined.

06 - In a shallow plate, mix Sugar and Cinnamon.

08 - Dip each roll in the Egg mixture until coated.

09 - Put the Rolls in the pan and lightly fry until they turns golden brown.

10 - Roll the rolls in the Cinnamon and Sugar mixture.

- You can either serve them hot or fridge-cold.