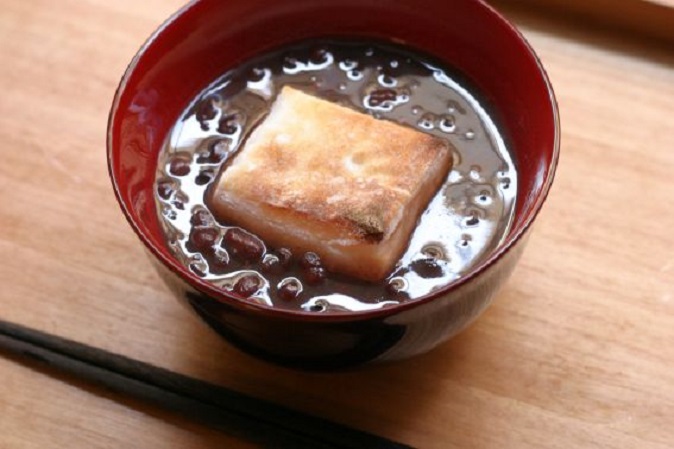 TRADITIONAL JAPANESE RECIPE: Zenzai is sweet Azuki red bean soup with baked Mochi or Dango in it. Zenzai is basically a red bean soup. It is a traditional Japanese snack popular during cold seasons.

Anko (sweet red bean paste) is the crucial ingredient for traditional Japanese confectioneries. It is a paste made with Azuki (red beans) and sugar.

Zenzai is a thick sweet soup consists of boiled azuki beans and often served with mochi (rice cake) or shiratama dango (glutinous rice flour dumplings – Recipe here). Oshiruko (お汁粉) or Shiruko is another name used in east of Japan where azuki beans are boiled and then crushed into paste and it has a more watery consistency than zenzai.

In Japanese, a number of names are used to refer to red bean paste; these include an (餡), anko (餡子), and ogura (小倉). Strictly speaking, the term an can refer to almost any sweet, edible, mashed paste, with azukian (小豆餡) referring specifically to the paste made with red beans, although without qualifiers red beans are assumed. Other common forms of an include shiroan (白餡, "white bean paste"), made from navy or other white beans, green beans, and kurian (栗餡), made from chestnuts.

Anko is used in a lot of different ways in many types of dessert in Japan. It could be used as is in cakes like Dorayaki (Anko sandwiched between sweet pancakes), or jellied and molded into Yokan.

02 - Put the Red Beans back in the pot and add 1kg / 2.2lb / 4.5 cups of Water, cover, and let it simmer at low heat for 1.5 to 2 hours (add more water to keep above the Beans). Once the Beans are very soft, easily crushable between your fingers, strain the Water in a pot and put it aside.

03 - Put the Beans back in the pot with Sugar at medium high heat and constantly stir and mix about 10 minutes until forming a paste that looks shiny but still loose.

04 - Add the Water you've saved ( step 2 ) back to the pot, add a pinch of Salt, and stir. Cook until hot, and keep it warm at low heat. Once cooked, put the soup in soup bowls ready to be served.

05 - Bake Mochi in a toaster oven until browned and expanded and put the Mochi inside the bowls over the soup.