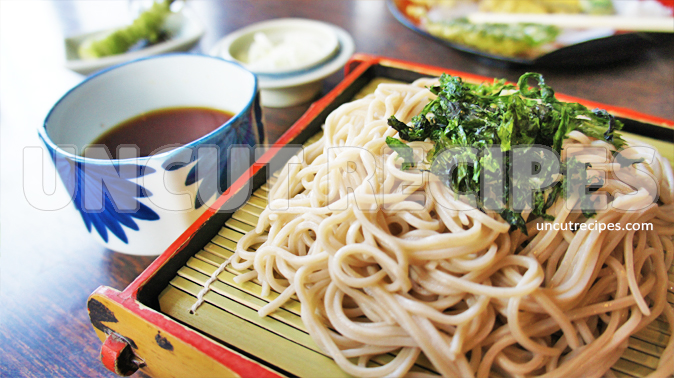 Soba (そば or 蕎麦) is the Japanese name for buckwheat. It usually refers to thin noodles made from buckwheat flour, or a combination of buckwheat and wheat flours (Nagano soba). They contrast to thick wheat noodles, called udon. Soba noodles are served either chilled with a dipping sauce ( Men-Tsuyu ), or in hot broth as a noodle soup.

In Japan, soba noodles are served in a variety of settings throughout Japan, but are also served by expensive specialty restaurants. Markets sell dried noodles and Men-Tsuyu, or instant noodle broth, to make home preparation easy. There are a wide variety of dishes, both hot for winter and cold for summer, using these noodles.

Soba is a good nutritional addition to a diet reliant on white rice and wheat flour. Thiamine, missing from white rice, is present in soba; eating thiamine (vitamin B1) can help prevent the disease beriberi. Soba contains all eight essential amino acids, including lysine, which is lacking in wheat flour. The tradition of eating soba arose in the Edo period ( 1603–1868 ).

There are different kinds of soba noodles in Japan, the primary differences between the varieties are texture and flavors.

Ju-wari Soba (十割そば) is made of 100% buckwheat flour. It has dry and rough texture so the noodles are easily broken compared to Hachi-wari Soba. Ju-wari soba has strong buckwheat aroma and flavor, and it is hard to make Ju-wari Soba because of its dry and crumbly texture.

Hachi-wari Soba (八割そば) is made from 80% buckwheat flour and 20% wheat flour. Hachi-wari means 80% in Japanese. The noodle is much smoother and it has al dente texture. Unlike Ju-wari Soba, it’s easy to swallow and chew. However, the buckwheat aroma is less than Ju-wari.

It’s hard to say which soba is tastier and more delicious; it really depends on personal preference.

A zaru (笊, ざる) is a draining basket made from bamboo used in the preparation and presentation of Japanese cuisine. It can be used in a similar fashion to a sieve or colander, both of which are common in western cooking. Additionally, well-designed zaru are used to present food directly, as for example zarusoba. Plastic and metal versions of the zaru have also come into use, but are rarely used to present food.

Similar to the makisu, zaru are dried, and stored after use to extend the lifespan of the tool, and prevent the growth of bacteria and fungi on the mat. However, drying in harsh sunlight can cause the bamboo of the zaru to crack.

Reflecting the zaru's capacity to soak up liquid, this term is also used as slang for a person who can drink a lot of alcohol without showing signs of inebriation.

01 - In rolling boiling water in a big pot, add the dried Soba Noodles and stir.

03 - Strain the Soba Noodles and cool under running water a bit and right after chill in ice water for a couple of minutes. Then strain again.

05 - Place Soba on plates and top with shredded Roasted Seaweed. Serve with Men-Tsuyu, Green Onions, and Wasabi on the side. 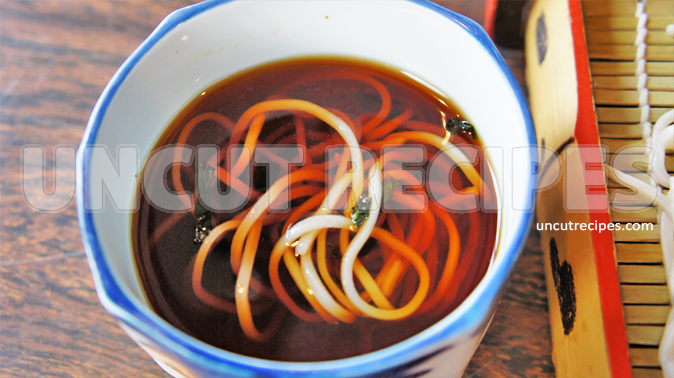