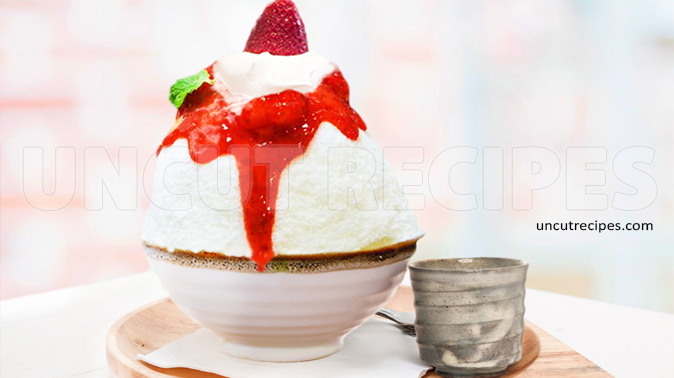 The traditional way of making kakigōri uses a hand cranked machine to spin a block of ice over a shaving blade. Even though electric shavers are most often used, street vendors can still be seen hand-shaving ice blocks in the summer.

It is similar to a snow cone but with some notable differences: It has a much smoother fluffier ice consistency, much like fresh fallen snow, and a spoon is almost always used to eat it. The texture of the ice distinguishes kakigōri from other types of shaved ice desserts.

In addition to the streets, kakigōri is sold in festivals, convenience stores, coffee shops, and restaurants. During the hot summer months, kakigōri is sold virtually everywhere in Japan. Especially at summer festivals and fairs, it is as popular as yakisoba, takoyaki and cotton candy. Kakigôri is one of the summer features in Japan. Some shops serve it with ice cream and sweetened red beans or tapioca pearls.

01 - In a pot, combine Strawberries, Sugar, and Lemon Juice. Cook at medium heat stirring often until boiling. Continue cooking about 3 minutes longer, and strain. Keep liquid only, and let it cool completely. (Strawberry chunks can be eaten separately as a ice cream or pancake topping.)

02 - Shave the Ice into a bowl to make a tall mound of shaved ice, according to the instructions of Kakigori machine.

03 - Pour 3-4 tablespoons of the Strawberry Syrup over the Ice and drizzle some Condensed Milk on top. Serve immediately.

- You can also add ingredients right inside the ice for a cool twist.