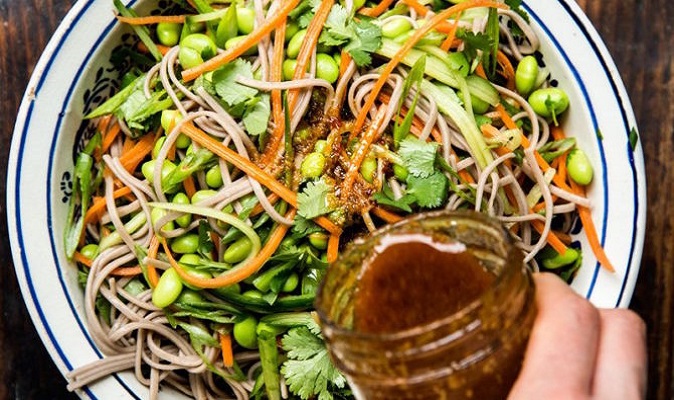 TRADITIONAL JAPANESE RECIPE: Soba Noodles are a very popular lunch food in Japan. They are usually served chilled with a dipping sauce ( Zaru Soba ) room temperature or in hot soup such as Soba Noodle Soup.

Ju-wari Soba (十割そば) is made of 100% buckwheat flour, hence it’s gluten free. It has dry and rough texture so the noodles are easily broken compared to Hachi-wari Soba. Ju-wari soba has strong buckwheat aroma and flavor, and it is hard to make because of its dry and crumbly texture.

Hachi-wari Soba (八割そば) is made from 80% buckwheat flour and 20% wheat flour. Hachi-wari means 80% in Japanese. The noodle is much smoother with an al dente texture. Unlike Ju-wari Soba, it’s easy to swallow and chew. However, the buckwheat aroma is less than Ju-wari.

01 - In a pot boil frozen shelled Edamame until soft.

02 - In a second pot, large one, boil plenty of Water and cook the Soba Noodles according to the package.

03 - In the meanwhile cut Carrot, Celery, and Red Bell Pepper 7.6cm / 3in long and cut lengthwise into thin sticks. Put everything in a bowl, cover with cling film and set aside.

04 - When the Edamame are soft, cool under running water and Set Aside.

05 - Once the Soba Noodles are ready, drain and immediately cool under running water. Drain well.

06 - In a large bowl, mix all the Dressing's Ingredients.

07 - Toss the vegetables, sesame seeds, and noodles with the dressing.