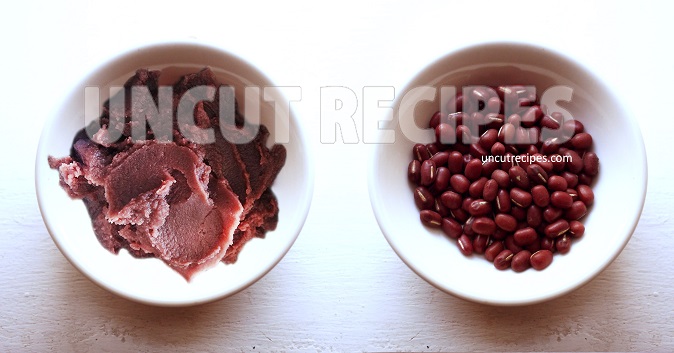 TRADITIONAL JAPANESE RECIPE: Anko or an (餡) as it is sometimes called, is a sweet paste that comes in red, green and many shades in between. Anko is typically made from azuki beans which have been boiled, mixed with sugar and then mashed and thickened into a paste.

Though mixing the bean paste with sugar is considered the standard nowadays, during the Kamakura period (1185-1333), salt rather than sugar was used to make anko. During the Edo era (1603-1868), domestic manufacturing of sugar grew and sweet anko became the standard.

The traditional way of making Koshian is much more complicated and time consuming than what we show here. Skilled Japanese dessert artisans have special ways to make Koshian with many steps. After cooking and mashing red beans, they strain and soak the paste in water. Once the insides of the red beans has settled, the clear water on top is removed leaving red bean sediment. Repeating this several times will let you extract pure form of red beans without the outer layer skins and other unwanted impurities. And then you can finally cook the paste with sugar, stirring constantly to get the right consistency and texture with a lot of care.

In those days anko was a luxury food and was said to be a treat that only those in the nobility were permitted to eat.

What Kinds of Anko Are There?

In short, there are many different varieties of anko based on the ingredients and preparation used, each with their own distinct flavor.

For example, tsubuan is a coarse sweet bean paste where the beans have only been lightly smashed. The skin of the beans and sometimes whole beans are left behind, giving tsubuan a more bean-like flavor and food texture.

On the other hand, koshian is anko where the bean paste has been pressed through a strainer, removing all the skin from the beans. When compared to tsubuan, koshian has smoother feel to it, almost as though it were melting.

White common beans, soy beans, green peas, and others may also be used instead of adzuki beans to make anko.

Anko is used to make the majority of Japanese traditional sweets. Here are some of the most famous of these wagashi.

ANPAN:
A type of sweet bun where the anko is wrapped inside a pancake-like bread and baked. It is a fluffy bun loved by both young and old.

OHAGI:
Anko wrapped around crushed cooked rice; this wagashi is quite filling.

MANJU:
Wagashi where the anko has been wrapped up in a thin dough (flour or rice based) and the cooked.The aromatic bun and anko are sublime.

DORAYAKI:
This wagashi features anko sandwiched between two soft pancakes. It is easy to carry and as such, a popular treat when out walking around town.

Where Can I try Anko? Any Famous Sightseeing Spots with Anko?

No matter where you go in Japan you are sure to find anko or some sort of dish featuring this sweet bean paste. As a result, now we would like to tell you a little about some of the wagashi and dishes with anko in them found around Japan.

Famous for Kinkakuji Temple and Kiyomizu-dera, in Kyoto you will find the delicious treat known as yatsuhashi, which is a thin slice of flattened mochi wrapped around a dollop of anko. In Aichi prefecture, buttered toast with anko, called ogura toast is a beloved treat of the locals.

In Mie prefecture where you will find Ise Grand Shrine, soft mochi covered in koshian called akafukumochi are extremely popular; so popular in fact that you would be hard pressed to find someone in Mie that hasn't heard of them.

The eternal favorite of Japanese sweet fans: anko. When you come to Japan, you have to give at least one of the delicious traditional anko treats mentioned in this article a try.

04 - Once the Beans turn very soft, easily crushable between your fingers, mash up the cooked Beans along with some of the cooked water in a food processor for 2 minutes.

05 - Strain through a fine mesh sieve, discarding the skin.

06 - Put the strained paste in a pot with Sugar, and cook at medium low heat stirring constantly for about 15 minutes. Once the paste has become very thick and shiny, transfer it to a flat container (such as a sheet pan) and cool.

- At direction number 3: Beans can be cooked in a pressure cooker if you want, which takes only about 20 minutes.