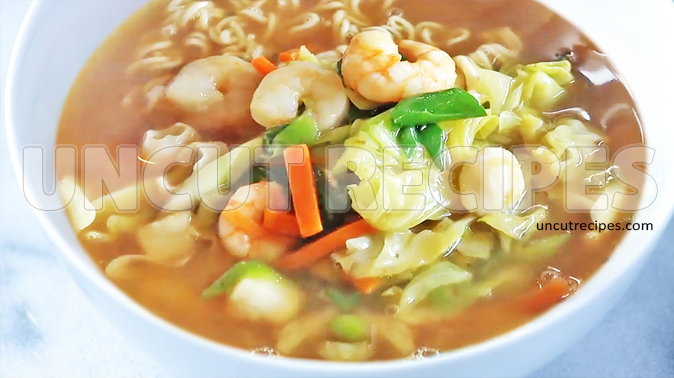 TRADITIONAL JAPANESE RECIPE: Apart from being incredibly easy to make, Instant Ramen with Vegetables has such an unique flavor. Instant ramen is like painting, all you need are vegetables.

Instant noodles were created by inventor Momofuku Ando in Japan and marketed in 1958 by Ando's company, Nissin, under the brand name Chikin Ramen. The instant noodle became ready to eat just in two minutes by adding boiling water and due to its price and novelty, Chikin Ramen was considered a luxury item initially, as Japanese grocery stores typically sold fresh noodles for one-sixth their price. Despite this, instant noodles eventually gained immense popularity, especially after being promoted by Mitsubishi Corporation.

01 - Cut the Vegetables accordingly. Set Aside.

04 - Put Cabbage and Carrot in the pan and stir fry for a minute or two.

06 - Uncover the pan and season with Salt, Pepper, Sake, Soy Sauce, Green Onions and the Potato Starch mixture ( STEP 02 ) and keep stiring until it thikens a little bit.

08 - Finally, pour in the Sesame Oil. Stir well and set aside covered, while you now prepare the Noodles.

09 - Boil the Instant Ramen according to the package instructions.

10 - Divide the Noodles into 2 bowls, and top with Vegetables.