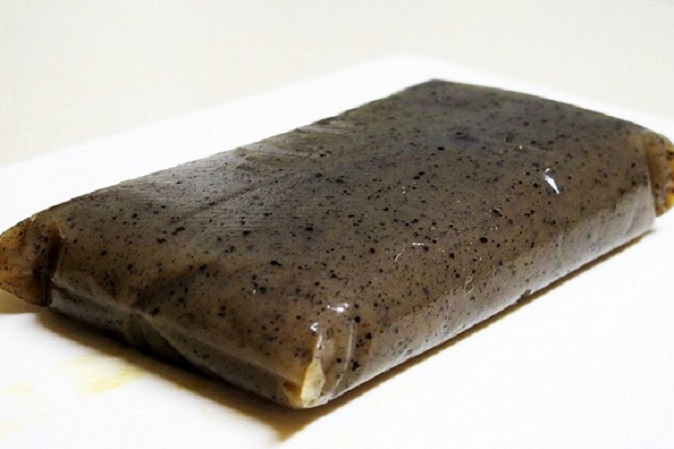 TRADITIONAL JAPANESE RECIPE: Konnyaku is one of the staple foods in Japanese culture. It's a jelly-like food, made from konnyaku yam root potato (also called devil's tongue). There are so many different varieties of shapes and types of konnyaku sold in Japan. It's rich in dietary fiber and extremely low in calories (almost none), so konnyaku is also a very popular health food in our culture.

When konnyaku is extremely fresh, Japanese people enjoy it sashimi style without cooking it.

Konnyaku in all its forms is extremely healthy. It's high in a type of fiber called glucomannan that supposedly helps you lose weight. It has traces of starch and protein and almost no calories since so much of it is made up of water. It also may help to normalize cholesterol, blood sugar, and blood pressure.

The Japanese call it inohouki (胃のほうき – broom of the stomach) because it does a great job of cleaning out your small intestines. That's secret code for 'it makes you poo.' It's used for this purpose in Chinese medicine and that's actually how it first came to Japan.

01 - Wash the Konnayku Potato and cut off the eye and peel.

02 - Grate the Konnyaku Potato into a pot of lukewarm water.

05 - Add the Baking Soda. At this time the color of the Konnyaku will change to grey.

06 - Once the consistency is right, move the Konnyaku into a mold and let it set.

07 - Dropping a bit of boiling water on, remove the Konnyaku.

09 - When the Konnyaku rise to the surface, take them out and stor it in the fridge.