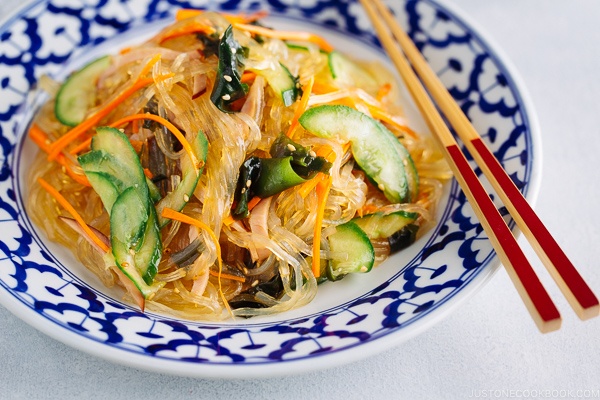 TRADITIONAL JAPANESE RECIPE: Japanese Glass Noodle Salad, or what they call Harusame Salad (春雨サラダ) in Japan, is known as a Chinese-style (中華風) salad due to the Chinese origin of glass noodles and the use of sesame oil in the salad dressing.

Harusame is the Japanese name for cellophane noodles or glass noodles. Japanese character kanji for Harusame is 春雨, which means spring (春) and rain (雨).

Harusame came to Japan from China during Kamakura period (1185-1333) as a vegan food for monks (Shojin Ryori 精進料理). It has been used in Japan for almost 800 years, but unlike Chinese glass noodles that are commonly made of mung beans (緑豆), most Japanese glass noodles are made of both sweet potato and potato starch in Nara prefecture and they are usually thicker than the Chinese counterparts.

Harusame thread is used all over the Asian countries. The main ingredient is a starch, often from Mung beans or potatoes. Harusame is sold in a dried form and needs to be rehydrated for cooking. When it is still dried, Harusame is a white color, but turns to clear noodles when hydrated in hot water. This smooth chewy noodle doesn’t have very much flavor itself but its taste changes depending on the seasonings you use. Harusame is usually used in Hot Pot dishes, soups, and also salads like this in Japan.

01 - Boil some Water in a small pot and add the Harusame Bean Threads. Stir. Let soak for a minute. Strain and let cool.

03 - Cut Cucumber and Ham thinly too.

05 - In a large bowl, mix the rest of the Ingredients for the dressing.

- Normally in Japan people mix the salad with Kinshi Tamago ( egg ), Ham, and Cucumber, but you can try different vegetables like Carrots, Shiitake Mushrooms, and cooked Ground Beef