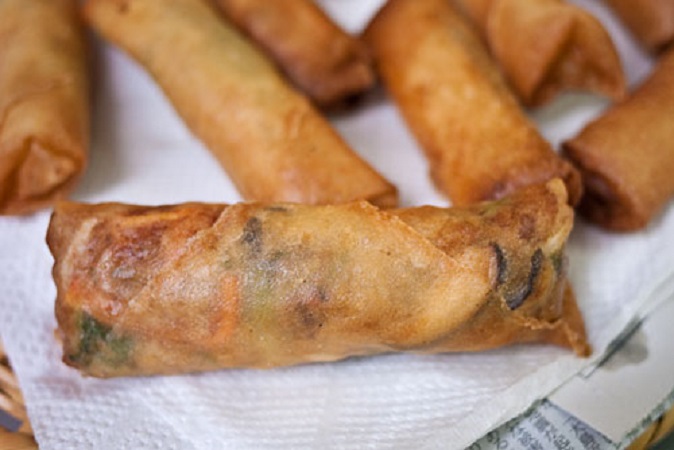 TRADITIONAL JAPANESE RECIPE: Harumaki (or spring roll actually in Japanese) are deep-fried egg rolls which are known well in Chinese cuisine in the US.

This recipe for spring rolls, or harumaki (春巻き) as they are called in Japanese, may not be authentic - or at least, not authentically Chinese. It's authentically Japanese-Chinese, or chuuka - Chinese dishes that were introduced to Japan mostly in the late 19th-20th centuries by Chinese immigrants (many of whom decided to stay), that have been adopted and adapted to Japanese tastes. Chuuka is not as heavily adapted as yoshoku (western style Japanese dishes), but they do differ in varying ways from the originals.

What’s inside the deep-fried packet is usually simple vegetables and meats, like cabbage, carrot, pork, and so on. However, we strongly recommend to include bamboo shoots and Shiitake mushrooms since they bring great flavors to Harumaki. Cut everything thinly like match sticks so they will be cooked through at the same time and easy to eat. It is important to thicken the filling so that it can be wrapped easily without the liquid from vegetables and seasonings seeping out.

03 - Cut the Pork into small bite size pieces and set aside.

04 - In a small bowl, mix together Soy Sauce, Sake, Water, and Potato Starch.

05 - In another small bowl, mix Flour and Water to make a loose paste and set aside.

06 - Heat 1 tablespoon of Oil in a large frying-pan at medium heat and stir-fry the Pork first, and add the Vegetables when the meat starts changing colour. Cook until soft.

08 - On a cutting board, place a sheet of Harumaki Wrapper. Put 1/10 of the Vegetable stir fry on the bottom part of the skin. Pick up the corner and start rolling tucking the side corners in. Use the flour paste on the inner edges of the skin at the end of rolling to glue the roll sealed, so it doesn't unroll or leak in the oil. Reapeat.

09 - Deep fry at high heat for a couple of minutes until browned.

- You can do the make-the-filling step some time in advance, but the rolls do need to be wrapped just before you fry them or the skins may become soggy.

- We recommend using readymade spring roll wrappers, which are made from white flour and water. These are available at any general Asian, Chinese or Japanese market, in the freezer section. They're about 9 inches (23cm or so) square, so you can't mix them up with the smaller shumai or gyoza (potsticker) skins. Making paper-thin spring roll wrappers from scratch takes spring rolls out of the realm of something you could conceivabley make for an everyday dinner to an epic, complicated task that should only be attempted when you have a whole weekend afternoon to spare.