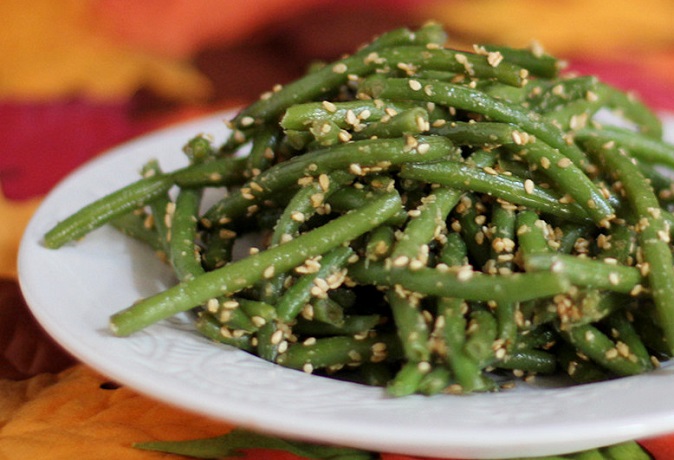 TRADITIONAL JAPANESE RECIPE: Green Beans with Sesame Sauce ( ingen no goma-ae いんげんのごま ) make a very simple and healthy side dish. All you need for dinner.

The crispy texture of the bean pods and the savory aroma of the sesame seeds makes it impossible to stop eating!

If you really want to dive into the Japanese tradition, you should use the Suribachi (mortar) and Surikogi (pestle) at home.

The suribachi is a pottery bowl, glazed on the outside and with a rough pattern called kushi-no-me on the unglazed inside. This surface is somewhat similar to the surface of the oroshigane (grater). The surikogi pestle is made from wood to avoid excessive wear on the suribachi. Traditionally, the wood from the sanshō tree (Japanese prickly ash) was used, which adds a slight flavor to the food, although nowadays other woods are more common. The bowls have a diameter from 10 cm to 30 cm. To use the suribachi the bowl is set on a non-slip surface, such as a rubber mat or a damp towel, and the surikogi is used to grind the material. Recently, plastic versions of the suribachi have also become popular, but they have a much shorter lifespan. The suribachi and surikogi arrived in Japan from China around 1000 AD. The mortar was first used for medicine, and only later for food products. A larger sized Japanese mortar used to pound rice is an usu with a pestle called kine.

The highest mountain on Iwo Jima, Mount Suribachi, was named after this kitchen device.

03 - Grind Sesame Seeds and combine it with Soy Sauce and Sugar in a bowl.