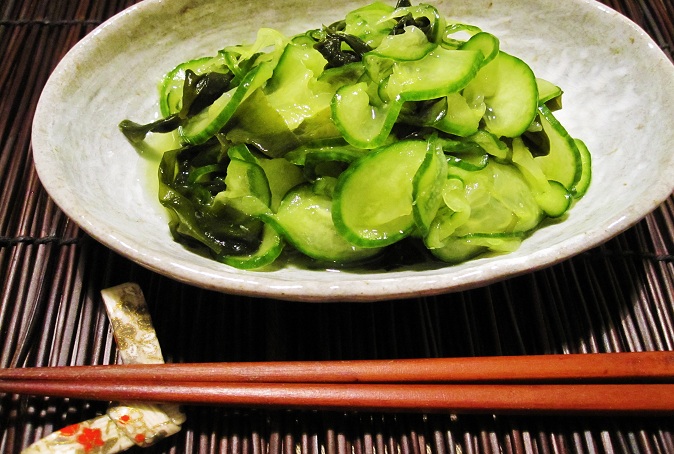 TRADITIONAL JAPANESE RECIPE: Sunomono ( or Cucumber Salad ) is a simple and very easy to prepare small side dish quite common in Japan. It’s easy to make, healthy to eat, and very refreshing to accompany any main dish... but remember, this is just an appetizers, you don't need too much. I'm saying this because once i ate at a friend house and she made a ton of it LOL

Sunomono is ( as SUshi ) a vinegar based dish usually made with cucumbers. “Su” means vinegar in Japanese. These light refreshing vinegar salads are an awesome start to any meal and the sourness from the vinegar helps open your appetite.

Differently from their American counterpart, Japanese cucumbers are much skinnier. One thing to keep in mind... many chemicals used in the US are illegal in Japan. In case you might think it has to do with insecticide and hormones. But there are genetical differences... they have much less and smaller seeds.

If you cannot find Japanese cucumbers, you can use English or Persian cucumber ( a bit shorter ) as substitutes.

01 - Wash the Cucumbers and with a vegetable peeler, peel six strips off of each Cucumber, leaving some of the peel intact.

04 - Place the slices in a bowl and sprinkle with Salt, and stir well. Set aside for about 5 minutes.

05 - Meanwhile, in a bowl combine the Sugar, Ginger ( optional Soy Sauce ) and Vinegar. Whisk together until well combined.

06 - Using your hands squeeze the excess liquid out of the Cucumbers.

07 - Mix the Cucumbers with the sauce and stir well.

08 - Place in the fridge to chill for 1 hour before serving.

09 - Before serving, sprinkle each portion with some Sesame Seeds.

- You can also add some thin Carrot shavings. The Carrot tastes good with this dressing and adds a really nice touch of colour.