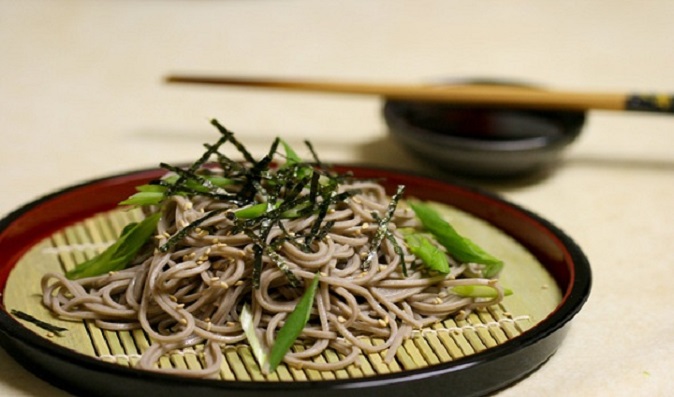 TRADITIONAL JAPANESE RECIPE: Soba is something you cannot make ahead of time. When you want to make it then, you'll have to eat it. so I recommend making the soba and tofu the day you want to eat it.

F or a bit of crunch you can even use watermelon radish here, but you can swap in whatever varietal you like - little coins of baby radish might be a nice alternative and potentially easier to come by.

Buckwheat is ready for harvest in three months, allowing four crops a year, mainly in spring, summer, and autumn. In Japan, buckwheat is produced mainly in Hokkaido. Soba that is made with newly harvested buckwheat is called "shin-soba". It is sweeter and more flavorful than regular soba.

02 - While you're waiting for the water to come up to temperature, place the Scallions, Shallots, and Ginger in a mortar and pestle. Sprinkle with the salt, and pound until everything is quite bruised, but not paste-like.

03 - Gently heat the Oil in a small saucepan until it is just hot enough that you could saute.

04 - Add the Scallion mixture, saute' and remove when ready. Transfer to a bowl to cool.

06 - Cook the Tofu, along with a pinch of Salt, in a well-seasoned skillet over medium-high heat for a few minutes, until the pieces are browned on one side.

07 - Add a tiny splash of Oil if needed, to prevent sticking. Toss gently once or twice, then continue cooking for another minute or so, until the Tofu is firm, golden, and bouncy.

09 - Drain, rinse under cold water to stop the cooking, and shake off as much water as possible. Toss the Noodles with a bit of the Oil off the top of the Scallion Ginger Paste at this point so the Noodles don't stick down the line.

10 - Serve the Soba along with the Scallion-Ginger paste.

- Radish, Tofu and Chives on the side.

- Soy Sauce must be served on the side. The soba will be dipped in and eaten.