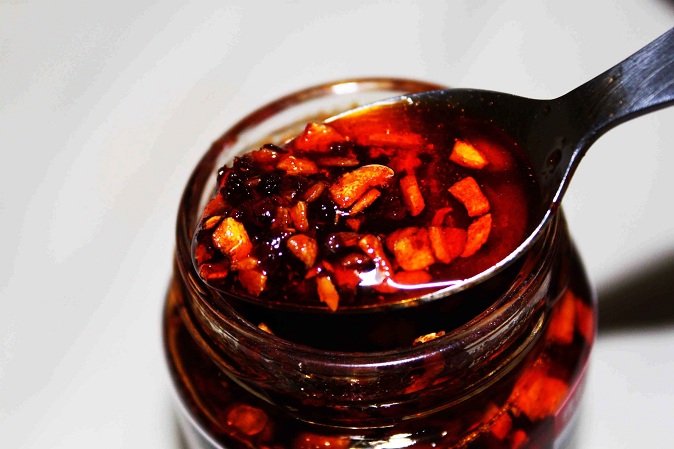 TRADITIONAL JAPANESE RECIPE: Taberu rayu (食べるラー油) or japanese chili oil is a commong Japanese condiment that's eaten with rice or noodles. This Taberu Rayu recipe is the traditional Japanese one. There are many variants out there, in fact, each country has its own.

Chili oil is a simple condiment made from vegetable oil that has been infused with chili peppers.

Rayu (ラー油) is a chili oil used in Japanese-style Chinese food, and as a condiment for things such as ramen and gyoza. Taberu rayu literally means “rayu meant for eating”.

The most commong version is the one used in the Chinese cuisine. Particularly popular in Sichuan cuisine, it is used as an ingredient in cooked dishes as well as a condiment. It is sometimes used as a dip for meat and dim sum. It is also employed in the Korean Chinese noodle soup dish jjamppong.

The Japanese variety ( the Okinawa one ) of Chinese chili oil is known as rāyu (ラー油 or 辣油), used in Japan as a cooking ingredient or as a condiment. The default kind is typically a clear, chili-infused sesame oil, and the chopped chili pepper used is typically red, imparting a reddish tint to the oil. Other ingredients used may include soy oil, corn oil, dried aloe, ginger, guava leaves, leek leaves, paprika, and turmeric.

Beginning in 2009, a new type of product known as taberu rāyu (食べるラー油 or -辣油, literally, "rāyu for eating") became a trend in 2010. This variety is known for reduced spiciness, and in addition to the usual oil, chunks of food are included such as fried garlic and fried onion.

01 - Add the Vegetable Oil in a small saucepan over a medium heat, until the Onion and Garlic begin to caramelize.

- Once cooled down you can preserve it in a sealed jar for up to a month at room temperature.