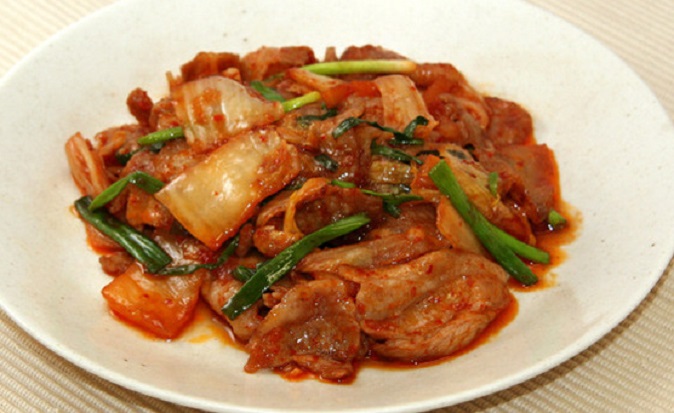 This spicy dish is popular in Japan at Izakaya ( bars which serve a lot of small appetizers with drinks ) and also at home as a quick and easy appetizer.

Kimchi is the famous Korean spicy pickled dish with nappa cabbage or other vegetables like Daikon radish.

Kimchi is a staple in Korean cuisine, is a traditional side dish made from salted and fermented vegetables, most commonly napa cabbage and Korean radishes, with a variety of seasonings including chili powder, scallions, garlic, ginger, and jeotgal (salted seafood).

There are hundreds of varieties of kimchi made with different vegetables as the main ingredients.

In traditional preparations, kimchi was stored underground in jars to keep cool, and unfrozen during the winter months. With the rise of technology, kimchi refrigerators are more commonly used to make kimchi

Although Japan and Korea do not really like eachother ( in historical terms ), Kimchi is well known and loved by many people in Japan. Kimuchi is eaten as is, of course, along with steamed rice, but it is also cooked in different dishes. Kimuchi is pickled with salt and often some kind of seafoods, then fermented to produce a complicated savory flavor beyond chili’s spiciness. Because of that, it can give a great taste to dishes with minimal effort.

This traditional basic Buta Kimchi recipe is such an easy and delicious dish to make if you have Kimchi on hand.

You can find Kimchi at virtually all Asian stores, or make it yourself ( KIMCHI RECIPE ).

03 - Heat Sesame Oil in a frying pan at medium heat.

04 - Place Pork into the flying pan and stir-fry until browned.

05 - Add Onions and Kimchi and cook for a minute.

06 - Add Soy Sauce and Sake. Stir, and cook until liquid is almost gone.