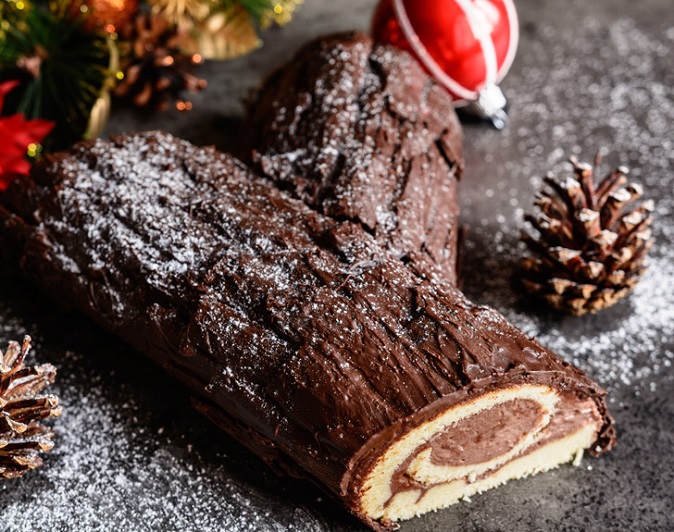 TRADITIONAL JAPANESE RECIPE: A "Yule log" (or bûche de Noël ) is a traditional dessert served near Christmas, especially in Belgium, France, Lebanon, Switzerland, Quebec, and several former French colonies. Made of sponge cake to resemble a miniature actual Yule log, it is a form of sweet roulade.

Because Japanese people are accustomed to eating Christmas themed cakes on Christmas day, Buche de Noel is a popular choice of Christmas cake in Japan.

The original "Yule log" recipe emerged during the 19th century.[citation needed] It is traditionally made from a genoise, generally baked in a large, shallow Swiss roll pan, iced, rolled to form a cylinder, and iced again on the outside. The most common combination is basic yellow sponge cake and chocolate buttercream, though many variations that include chocolate cake, ganache, and icings flavored with espresso or liqueurs exist.

"Yule logs" are often served with one end cut off and set atop the cake, or protruding from its side to resemble a chopped off branch. A bark-like texture is often produced by dragging a fork through the icing, and powdered sugar sprinkled to resemble snow. Other cake decorations may include actual tree branches, fresh berries, and mushrooms made of meringue or marzipan.

The name bûche de Noël originally referred to the "Yule log" itself, and was transferred to the dessert only after the custom had fallen out of use, presumably during the first half of the 20th century. By 1945, it referred to the cake.

03 - Divide the Eggs into Whites and Yolks in two different bowls. Set aside.

04 - Sift Cake Flour and Cocoa together, and set aside.

07 - Whip the Egg Whites. When the Eggs are forming into meringue, start adding the rest of the Sugar, slowly. Whip until almost forming stiff peaks.

08 - In the bowl of beaten Yolks, add 1/3 of the whipped Egg Whites, and mix in carefully without deflating the foam. Add the rest of the mixture and carefully mix in the same way.

11 - Pour the Batter into the prepared baking pan ( from step 02 ), spread evenly, and bake for 10-12 minutes. Take out from the oven, cool in the pan completely, covered with plastic.

12 - Chop the Chocolate into very small pieces and put in a medium bowl.

13 - Heat the Heavy Cream to just before boiling and add to chocolate in. Leave for a couple of minutes without disturbing. Stir well with a spatula until completely mixed. Let it sit at least 3-4 hours to set, preferably overnight.

14 - In a bowl, put half of the Buttercream and 2-3 tablespoons of Ganache and mix well.

15 - In a different bowl, put the rest of the Buttercream and Ganache and mix well.

18 - From the one side of the Cake, start rolling. Wrap the cake with the parchment end side down and refrigerate for 1 hour.

19 - If you like, you can cut out pieces of the cake with round cookie cutters to make branch stumps, by filling the holes with the frosting, and place round cake pieces on top... or cut the Cake to make a second branch.

21 - Cover the surface of the ends of the log and of any branch stumps with filling (the lighter color cream).

22 - With a fork, make lines like the surface of trees (bark) and circles on the ends and stumps.

- If you add a misture of Sugar powder and Chocolate Powder you mey be able to obtain different shades of brown for the bark. Also use Green Tea Powder to give a musk effect.