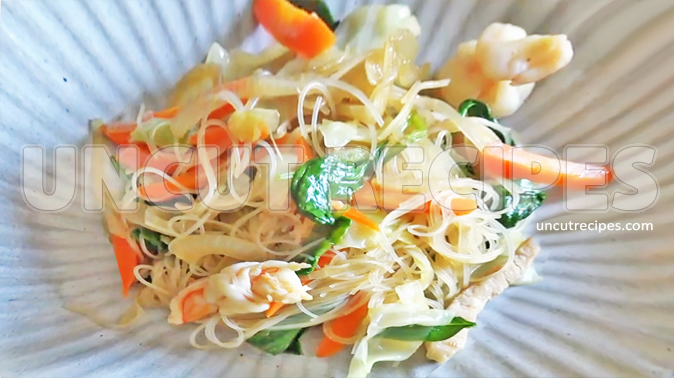 In East Asia, the term rice vermicelli is often used to describe the thin rice noodles (米粉) popular in China. The term vermicelli may also refer to noodles made from mung bean or sweet potato, which are translucent when cooked, whereas rice vermicelli turns whitish when cooked.

In 14th-century Italy, long pasta shapes had varying local names. Barnabas de Reatinis of Reggio notes in his Compendium de naturis et proprietatibus alimentorum (1338) that the Tuscan vermicelli are called orati in Bologna, minutelli in Venice, fermentini in Reggio, and pancardelle in Mantua.

01 - Cut all the Vegetables, Pork, and Shrimp accordingly.

02 - ( while the Vermicelli cook ) In a frying pan, heat the Oil at medium heat and cook the Pork.

03 - Once the Pork is cooked, add Shrimp and cook until the color changes.

04 - Now add all the Vegetables except Spinach, and cook until softened.

05 - While the Vegetables cook, following the instructions on the package, rehydrate the Dried Vermicelli in hot Water. This should take about one minute.

07 - Add the Vermicelli Noodles in the pan and stir fry for about a minute.

08 - Add Water and Seasonings, and cook for a couple of minutes.

09 - Finally add Spinach and cook for another minute. Serve.

- The amount of rice vermicelli in the recipe refers to the dry weight before blanching. After the blanching, the weight for 200g of dry vermicelli becomes 488g.

- Blanch the Vermicelli in boiling water, drained and quickly cool in cold water before stir-frying. The cold water treatment is the standard procedure to cook wonton noodles and it works perfectly for this recipe too as it produces a springy texture and less sticky.