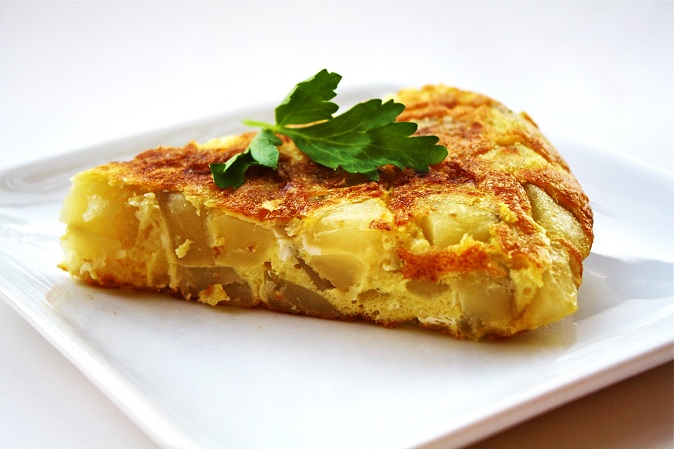 TRADITIONAL ITALIAN RECIPE: This simple potato Omelette should be accompanied with a glass of wine and a green salad, for a satisfying, affordable dinner.

There are few things in life that aren't improved by the addition of potato,a fry-up, a proper linguine alla genovese … even, a chocolate cuprcake in Delia's crazy world.

The Italian Omelette is much like the Spanish Omelette.Comfort food par excellence, which transforms a couple of humble ingredients into a dish fit for el reino himself.

When making any sort of frittata, I generally add the beaten eggs to the other ingredients in the pan. This makes more sense from a textural point of view, as it helps to stop all the potato sinking to the bottom.

Some recipes call for the potatoes to be sliced as thinly as possible, ideally using a mandolin, and then deep fried, albeit at a fairly low temperature, the idea isn't quite as outlandish as it first appears.

The first reference to the tortilla in Spanish is found in a Navarrese document. It is an anonymous "Mousehole's memorial" addressed to Navarra's Court in 1817. It explains the sparse conditions of the farmers in contrast with Pamplona's and the Ribera's inhabitants. After listing the sparse food eaten by highlanders, the next quote follows: "…two to three eggs in tortilla for 5 or 6 [people] as our women do know how to make it big and thick with less eggs, mixing potatoes, breadcrumbs or whatever."

According to legend, during the siege of Bilbao, Carlist general Tomás de Zumalacárregui created the "tortilla de patatas" as an easy, fast and nutritious dish to satisfy the scarcities of the Carlist army. Although it remains unknown whether this is true, it appears the tortilla started to spread during the early Carlist wars.

Another tale is that during the war, Zumalacárregui was in the field and happened upon a farmhouse and demanded a meal from the farmwife. All she had were a few eggs, a potato and an onion, so she combined all three, making an omelette. Surprisingly, Zumalacárregui was pleased and took the idea with him.

01 - Peel and cut the Potatoes into small chunks ( dices ) and boil them in salted water. Do not boil them too much, you need them soft but not mushy.

02 - Once the Potatoes are ready and cooled, in a bowl beat the Eggs.

03 - Add the Grated Parmesan Cheese, chopped Parsley, Salt, Pepper, Nutmeg and the cooled Potatoes to the eggs. Blend everything.

04 - Pour the Oil in a frying pan on a medium heat. Turn the pan side to side, spreading the Oil evenly, and pour the Egg mixture.

- Because the Omelette is mainly made with eggs, try to eat it all the very same day. If you can't then, you can keep it in the fridge ( in a sealed or cling film wrapped ) for 24 hours.

- With Salad, a portion of Potato Omelette can become a meal.