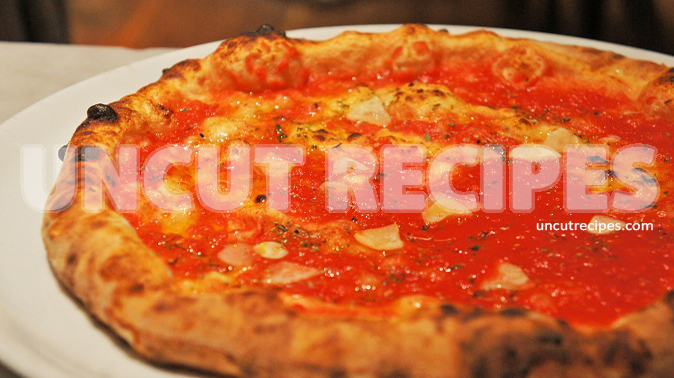 TRADITIONAL ITALIAN RECIPE: Pizza was considered a peasant's meal in Italy for centuries. Modern Pizza is believed to have been invented by a man called Raffaele Esposito a baker in Napes aski (Napoli), in the Campania region of Italy.

According to published reports, in 1889 Esposito of Pizzeria di Pietro ( now called Pizzeria Brandi ) baked pizza especially for the visit of Italian King Umberto I and Queen Margherita. One of these pizzas embellished the classic pizza alla marinara with mozzarella and basil.

But Pizza is not originally Italian, the idea actually dates back to the 16 century Greeks who eat flat round bread (plankutos) backed with an assortment of toppings.

Tomatoes, which was originally thought to be a poisonous ornamental plant, came from Italy to Mexico and from Peru to Spain.

True mozzarella is actually made from the milk of the water buffalo and was imported from India in the 7th century. It was not widely available as a cheese product in Southern Italy and Campania until the second half of the eighteenth century.

Pizza Marinara is actually my favourite. It's like Margherita but easier to digest.

I think the Marinara Pizza is also many pizzaiolos favorite to make. It is a Pizza pie with no Cheese and I think reflects the skill and passion of a pizza maker’s ability to evoke deep flavors from such simple ingredients.

Marinara sauce is said to come from the term Mariner’s sauce. One of the folk legends about the history of this sauce says that it was invented after the Spaniards introduced the tomato to Europe and it quickly became the sauce of choice for those at sea because it was simple, easy to make, was flavorful and wouldn’t spoil as fast as other sauces on their long journeys.

No matter where it came from, it is a simple sauce that is full of the robust flavors of quality tomatoes.

The traditional Marinara Pizza has tomatoes crushed, or blended, sliced fresh garlic, fresh oregano, extra virgin olive oil and maybe some sea salt to taste. Some pizzerias may use basil instead, or in addition to the Oregano. This Pizza not only allows the skill of the pizza maker to come through, but really showcases the quality of the individual ingredients.

This Pizza is all about balance. Since there is nothing on top of the tomatoes you have to layer enough sauce to ensure that the sauce doesn’t dry up, or dry out in the oven.

The dough has to be a bit chewy, the crust MUST be crispy, but still with a little chew. Of course, having a Pizza Stone really helps.

I think the longer bake times in a home oven can make this more of a dance, than if it were done with a 90 second bake in a wood fired oven. Top with the ingredients keeping balance in mind. This Pizza is all about the Tomatoes. The Garlic, Oregano and Oil are there as accents.

Always remember to add the Oregano and drizzle with a little more Oil before you serve it.

02 - Add Yeast and stir gently and let sit for 5 to 10 minutes, or until the yeast activates by turning into a foam on top of the water.

04 - Gradually add in the Flour as you stir the mixture simultaneously. You know you have added enough Flour when the mixture becomes too thick to stir.

06 - Take the Dough out of the bowl and put it on a clean and well-floured surface ( a marble counter or clean table is best ).

07 - Gather the Dough into a pile and begin pressing it together. Press the heels of your hands firmly into the Dough, pushing forward slightly.

08 - Fold the far edge of the Dough upwards, towards you, and press it into the middle of the ball. Rotate it slightly, too. Repeat this press-fold-turn sequence for the duration of the kneading process.

09 - Let the Dough rise up for 1 hour at room temperature or 5 hours in the refrigerator.

10 - Place on a floured counter and flour the top of the Dough.

11 - Cut the Dough into two round Balls.

13 - Pick up the disk of Dough, and pinch the dough about 1.5cm / 0.5in from the edge. Try and stretch as you pinch, repeat this all around the edge. When the disk of Dough has been stretched enough to start to be floppy, proceed to tossing.

14 - Make a fist and drape the Dough over your fist. Make a fist of the other hand and slip it under the Dough next to your other fist. Carefully move your fists apart stretching the Dough more. Shift your fists ( left towards your face, right away ) so the Dough rotates while stretching.

15 - When the Dough has reached about 20cm / 8in in diameter, you can quickly move your left fist in an arc that goes backwards towards your face. Do this while twisting your right fist forward away from your face. If you give a a little push upwards with your right fist the Dough will spin like a Frisbee. Practice how it feels to balance the force of the fist twists equally. This will keep the Pizza from spinning off into the corner ( or worse ).

Be sure to catch the falling spinning Pizza as gently as you can with your two fists to avoid tearing. But if tearing just start over and do the spinning process over again.

16- Boil for 5 minutes the Passata Sauce.

17 - While you wait for the Passata to boil, cut in very thin slices the Cloves of Garlic. Generally it is about 1 Clove for each pizza.

19 - Place one portion of Sauce on each Pizza and top with the sliced Garlic.

21 - Add a pinch of Olive Oil and fresh Oregano before serving.