TRADITIONAL ITALIAN RECIPE: In this little less complicated recipe you'll be able to reproduce the traditional Neapolitan Pizza dough, based on the traditional neapolitan method. The video shows Davide Civitiello and Gino Sorbillo's demostrating how to make Pizza, they are the two most famous italian pizza makers in the world.

01 - Place the Flour on the left side of your container, we've used a traditional Kneading Trough ( Madia in Italian ) also known as Bread Trough or Artesa, but you can use a very large bowl or a deep oven dish.

02 - Pour half of the Water on the right side of the Madia.

03 - Gently dissolve the Sea Salt in the Water.

04 - Add the Yeast into the Flour by crumbling it with your fingers.

07 - Knead the Dough with your hands and then only using the pressure of your fists fold it multiple times. This should take you about 15 minutes.

08 - Move the Dough back in your container and cover with cling film or a clean kitchen tower, and let it rest for at least 2 hours at room temperature 25C / 77F.

09 - Cut the Dough in smaller portions with the same technique you cut Mozzarella ( watch video ). Each portion should be 250gr / 8.81oz. 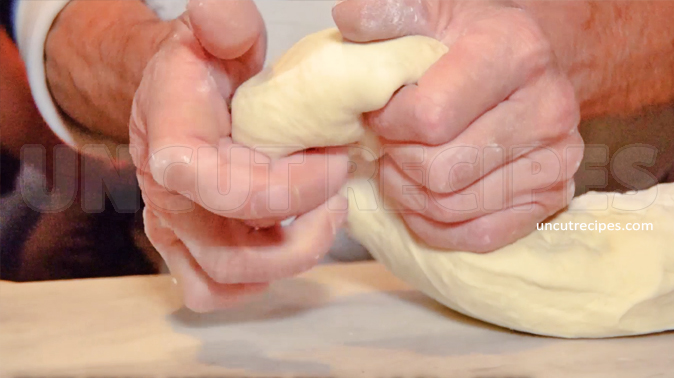 
10 - Place the Dough balls in a large container, cover with cling film and let it rest for an extra 6 hours.

11 - Place the Dough on a floured counter and put some Flour on top of the Dough, and start spreading out the Dough to a 20cm / 8in disk in diameter. 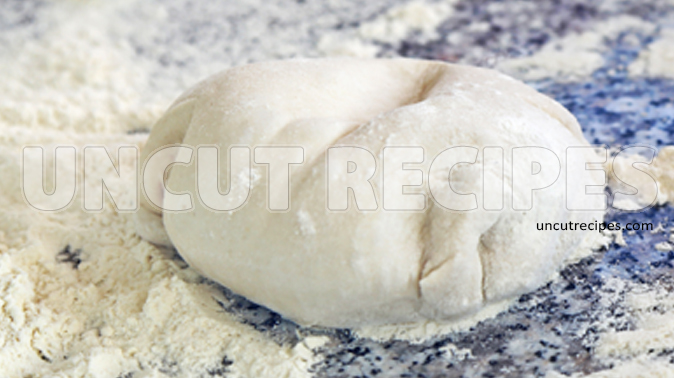 - Dough Rising: The first phase: remove the dough from the mixer, and place it on a surface in the pizzeria where it can be left to rest for 2 hours, covered from a damp cloth. In this manner, the dough’s surface cannot become harden, nor can it form a crust from the evaporation of the moisture released from the dough. The dough is left for the 2 hours rising in the form of a ball, which must be made by the pizzaiolo exclusively by hand.

With the aid of a spatula, cut from the mixture into smaller portions, which are then shaped onto a ball. For “Pizza Napoletana”, the dough balls must weigh between the 180 and the 250 g.

The second phase of the dough rising: Once the individual dough balls are formed, they are left in “rising boxes” for a second rising, which lasts from 4 to 6 hours. By controlling storage temperature, these dough balls can then be used at any time within the following 6 hours.