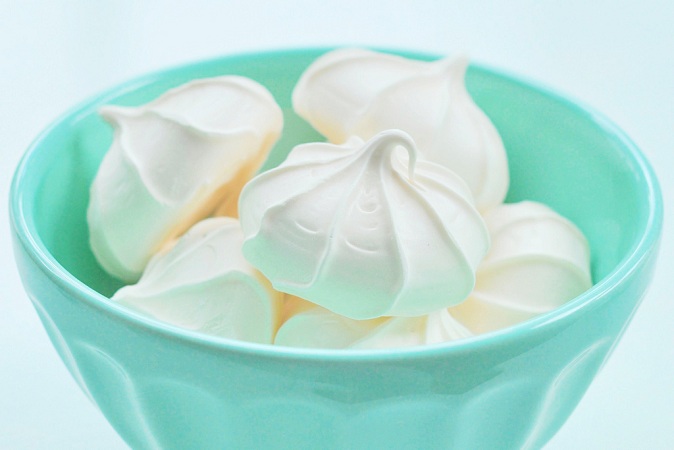 TRADITIONAL ITALIAN RECIPE: This must be the most popular egg-white recipe of all, whipped with fine sugar into tall, stiff, shining peaks, then very lightly baked so that the surface is crisp and the centre is soft and chewy.

The great, towering, glossy confections created by Yotam Ottolenghi, so impressive they stop pedestrian traffic outside his north London shop.

These are Italian Meringues because have a bit of water in it. That's all.
That's how they do it in Italy!
HEY... don't you judge me! Cut yourself! :P

Meringues have the reputation of being difficult to make, but actually they are what i call Husband-Proof, as long as you follow a few cast-iron rules, they're a doddle. I say that as someone who has disregarded these rules in the past, and paid the price. As with so many baking recipes, creativity with the basics will not pay off here. Egg whites, beaten to stiff peaks, are obviously a must, plus sugar. But here things get surprisingly complicated for a dish containing just four ingredients.

One of the golden rules of meringue making is that all of your equipment must be scrupulously clean, without a speck of grease. Nor cleaned British-Style, with the washing-up foam still on the equipment. Wash-up everything, and rinse well under the water! Simple!

There is another trick, an advanced one you should try once you have tested Meringues for a few times. To improve the chances of achieving a stable foam you can add a little acid, such as lemon juice ( or vinegar ) to the mixture, after the sugar. This also helps to make it "crisp on the outside, soft and sticky on the inside".

Caster sugar is the usual option for meringues. The small grains dissolve easily in the foamy mixture. However, you can use half caster and half icing sugar which is even finer. The resulting meringues are very light.

Orange Meringues may simply have been on a too high a temperature. Place a wooden spoon to keep the oven door slightly open to prevent it overheating, on the other hand this doesn't feel much like cooking when the door is open, so you might ruin everything.

Sometimes 100C / 212F is too high. You need to put them in at 60C / 140F, 70C / 158F for 4 hours... EVEN BETTER for 6 hours overnight. You don't cook meringues so much as dry them out as the water evaporating would leave only the rigid structure of the egg and sugar mix, and the air bubbles in between. For the best result ever, you should put the oven at its lowest setting ( 60C / 140F ), and leave them in cooking for six hours.

02 - Boil the Water in a pot and mix in the Sugar until dissolved.

03 - While you wait for the Water to boil, divide the Eggs and place the Whites into an Electric Mixer Bowl and whisk the Whites until stiff peaks form when the whisk is removed, but the mixture should not look too dry.

( You can use the Yolks for another recipe, such as Custard or Ice Cream )

04 - Once the Water reaches the boiling stage, turn the mixer down and pour half of the Syrup right into the whisked Whites into the bowl.

05 - Turn the whisker back up again and pour the rest of the Syrup, without switching the electric mixer off.

06 - When the Meringue mixture is thick and glossy pour everything into a piping bag with the nozzle you prefer.

07 - Squeeze the Meringue mixture on the oven tray and bake for about 4 hours, leaving the oven door slightly open to let the humidity out.

08 - When the Meringues are cooked and ready let them cool inside the oven ( switched off ) for a couple of hours until completelly cooled.

- Store the Meringues into a container for a couple of days, making sure the expiring date of the Eggs allows it.