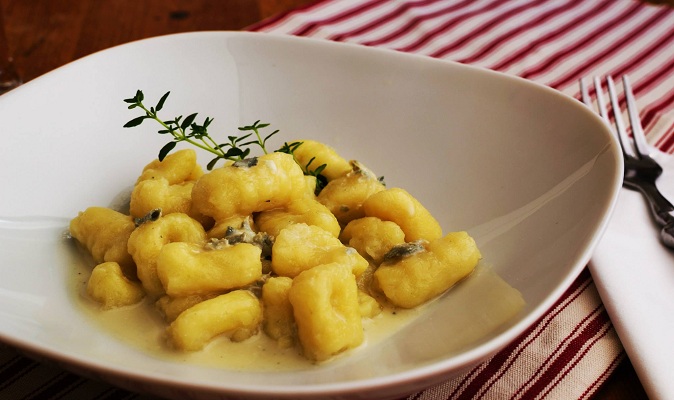 TRADITIONAL ITALIAN RECIPE: For me, creaminess is the essence of gnocchi with gorgonzola sauce, so when I make it, I like to ( literally ) drown the gnocchi in lots of sauce. It’s a personal preference, not one that is necessary. The resulting dish, needless to say, is very rich, so a little bit goes a long way. It is so substantial, in fact, that it can serve as a piatto unico followed by a green salad and a piece of fruit.

Although the recipe is simplicity itself, there are a few pointers to bear in mind when making gnocchi with gorgonzola sauce.

Gorgonzola comes in two varieties: gorgonzola piccante, which is aged longer, resulting in a firmer texture and sharper taste, and gorgonzola dolce which is young, creamy and quite mild in flavor. You want the dolce version for this dish if you can find it, for some reason, it is much easier to find the piccante abroad, just the opposite of the case in Italy.

In Italy, there are two kinds of cream sold: panna per cucinare, meaning "cooking cream", and panna da montare "whipping cream". The former is used, as the name suggests, in cooked dished that call for cream. It is quite thick and if you’re using it for this dish, there’s no need for the initial reduction mentioned above. Heavy cream sold abroad has the same texture as panna da montare. I have never seen "cooking cream" anywhere else. Unfortunately, that's the one you are supposed to use.

As with many well-known dishes, there are lots of variations on the basic recipe. For a bit of color, try adding chopped parsley or chives along with the parmesan at the very end.

Gorgonzola goes very well with both walnuts and radicchio, so you can add either (or both, I suppose) to the sauce. The radicchio you would shred and saute in the butter at the outset before adding the cream. The walnuts you would chop finely and along with the gorgonzola after the cream has reduced. And a good grinding of freshly ground pepper, at the very end, makes for an ‘earthier’ dish. You can even try more creative variations, like adding pears, another classic pairing with gorgonzola, or saffron.

You can also use this gorgonzola sauce with pasta, preferably a stubby pasta like rigatoni or penne. Long pasta, like spaghetti just doesn go well.

One final thought: Italian cooking, as you may know, is very seasonal. You could make this dish any time of year, but I associate rich dishes like gnocchi with gorgonzola sauce with cooler weather, when you crave its rich, stick-to-the-ribs quality. It would be overwhelming in warm or hot weather.For those who are in summer right now, you’d probably prefer to have something a bit lighter like gnocchi with pesto instead.

01 - The first thing to do is to boil the Potatoes in their skins.

02 - After about 25 Minutes turn the heat off and tip them into a colander to drain.

04 - Pass the Potatoes through a potato ricer.

05- Let the mash cool slightly and then sprinkle over the Flour, add 2 generous pinches of Salt, Black Pepper, and finally pour in the Egg.

06 - Use your hands to mix it together. After a minute or two it will form into a Dough. Knead lightly. When it reaches a pliable consistency, it's ready.

07 - Sprinkle the surface with Flour. Slice a fist-sized piece from the Dough ball and roll out into lengths that are about 3cm / 1.2in thick.

09 - You can either leave the Gnocchi smooth or give the classic gnocchi-shape by pressing the Gnocchi against the prong of a fork and rolling it off.

10 - Place the Gnocchi onto a tray, leaving a space between each piece to prevent them from sticking together.

11 - Boil some Water in large and deep pan. Add some Salt.

12 - While the Gnocchi are cooking, melt the Gorgonzola and Butter in a saucepan over medium-low heat.

13 - When Gorgonzola and Butter are completely melted add the Double Cream and boil for 1 minute.

14 - When the Gnocchi have all bobbed to the surface, they're ready to serve. Scoop them out with a sieve, shake off the water and transfer them inside the saucepan with the Cheese Sauce and gently stir to mix.

- Quantities of Cheese, Butter and Double Cream can change. Put as much as you like!

- The size of the Gnocchi can vary as desired.

- You can leave them as they are, even without the lines.

- Sprinkle some Flour on and put them in the frige for 24 hours. Remember, Gnocchi contain Eggs, so the sooner you eat them, the better.