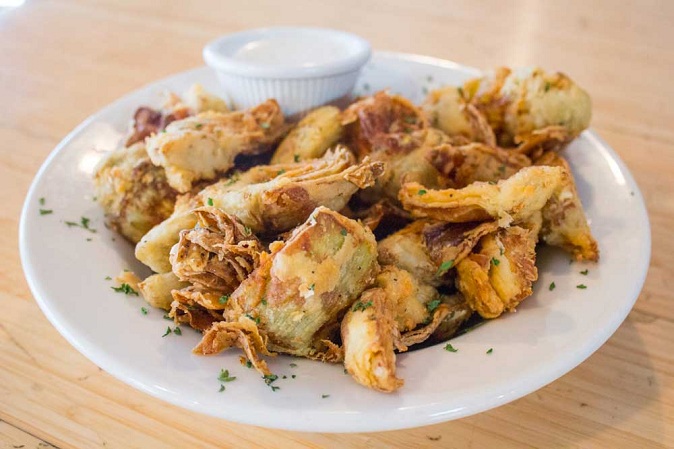 This is the recipe, and I'm your guy!

In Rome, they use a variety of artichokes called cimaroli that is free from thorns and the hairy central choke, which means you can trim them, cook them, and eat them without worrying about the choke. If you can't find that variety, you have a couple of options. You can use baby artichokes. They're small enough that the choke isn't an issue. Or you can use full-size artichokes, but you'll have to remove the choke before serving.

To cook the artichokes, start by lowering them gently into oil that's heated to about 140C / 280F. The exact temperature isn't super critical, it just needs to be hot enough to cook them but not so hot that they're rapidly frying ( otherwise, you risk burning the outsides before the insides are done ). Look for a steady but non-violent stream of bubbles rising out of the artichokes. This should take about 10 minutes for baby artichokes and 15 minutes for larger ones.

How to clean Artichokes:

Everything about the artichoke, the edible flower bud of a plant in the thistle family, suggests that it doesn't want to be eaten. How else to explain the armor-like petals ( bracts ), prickly thorns, and throat-clogging choke? It's enough to scare off even the most intrepid cook.

But the reality is that preparing artichokes is easy as long as you know how to go about it. Like a lion tamer, with the right tools and approach, you will prevail.

Note that in all cases, I recommend wearing latex gloves if you have them. While not essential, the gloves keep your skin free of the artichoke's bitter raw fluids, which have a way of tainting any other food you touch after handling the artichokes.

Before you start, fill a large bowl with cold water. Squeeze a couple lemons into it and drop the lemon halves into the water; I keep one half of a lemon off to the side in case I need it for rubbing on the cut sides of the artichoke (the citric acid can sometimes help slow browning due to oxidation).

01 - Peel the Artichokes removing the tough outer leaves, and cut tops and stems just below the base. Keep the heart of the Artichokes. To prevent them from blackening during the preparation sprinkle half Lemon.

02 - Cut each Artichoke into 4, 8 or more parts and wash them under running water.

03 - Put Eggs, Flour, Salt, Oil, Yeast and Mustard into a large bowl and mix until a Batter has formed.

04 - Soak the Artichokes into the Batter for a couple of minutes.

05 - In the meanwhile heat the Oil in a large frying pan.

06 - Making sure they do not stick to one another and fry the Artichokes for about 4 minutes.

07 - Remove them from the Oil and put them to drain on Kitchen Paper.

08 - Sprinkle with a pinch of Salt and some Parsley. Serve hot.

- Do not storage, nor freeze. Unfortunately you will have to cook the right amount.

- You can swap the Mustard Powder with twice the amount of Mustard Cream.

- Instead of sprinkling the Parsley on top before serving, you can mix the finely chopped Parsley into the Batter.