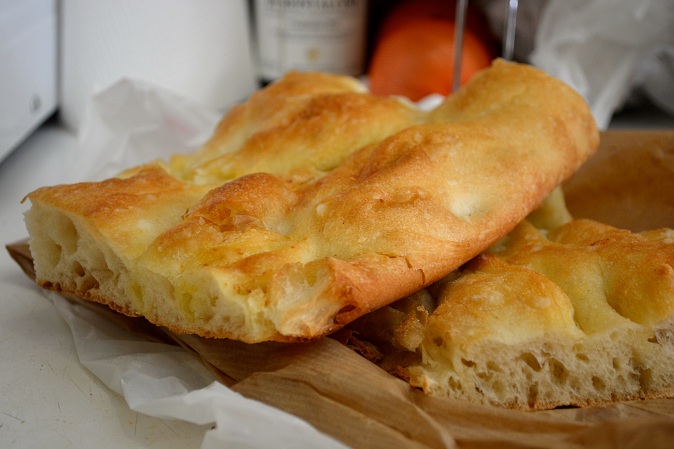 TRADITIONAL ITALIAN RECIPE: In 2011 I travelled to Naples, Italy to see first hand how they make Focaccia.

The first time was quite dramatic. I walked into this so called Pizza School, something super lame, and the person teaching the art of Pizza Making had dirty cracked hands. I was embarrassed for myself being there and for the students. But I listened, without saying anything ( although I wanted to take my stuff and leave ). At the end, about 1 hour later, the teacher cuts the Focaccia and give everyone a slice... and guess what? I passed! Ahahahaha! I was like "no no thanks, I'm fine thanks! My stomach is a bit upset today!" :D

To me, when someone cookes for other people, they should ALWAYS wear gloves. If they don't, to me, that's unhygienic and unacceptable. Am I wrong? I mean, if you cook for yourself or your own family, you are free to do whatever you want. You can knead the dough into your shoe if you like... I wouldn't personally give a care... but when it comes to serving to other people, and worse, teaching the professional art of pizza making then, that's a problem.

The added leavening firms the crust and gives Focaccia the capacity to absorb large amounts of Olive Oil. Unleavened Pizza Dough is already too dense to absorb much Olive Oil.

Focaccia is often sold square whereas conventional Pizza is more commonly round. Focaccia most often employs more Salt than Pizza.

The dough can either be chewy or crispy. Either way having a Pizza Stone really helps... not because i'm selling them, but because they really helps! ;)

Contrary to Pizza where more than one topping is often found mixed on the same Pizza, toppings are not commonly mixed on one Focaccia although one topping and one Herb might be mixed.

Whereas Pizza often has toppings Peppered only intermittently on its surface, on Focaccia, a single topping is often layered more uniformly and thick.

01 - Dissolve the Salt into a bowl of slitly Warm Water and add the Sugar to it.

02 - Add 2 tablespoons of Oil and 1.25 cups of Flour. Gently stir with your hand or a wooden spoon or using a machine to form a very liquid Dough.

03 - Now you can add the Dried Yeast. Stir for about 5 minutes and then start adding the other half of Flour.

04 - Veil some Flour on top of the Dough and leave it in a warm place for about 45 minutes, or until it has almost doubled in size. When ready, Oil the Dough and the tray.

05 - Start stretching the Dough by hand in the container you have chosen and add some extra Oil on top.

06 - With floured fingers press holes in the Dough at regular intervals, sprinkle some Salt and Oil.

09 - Cut the Focaccia in small slices and serve.