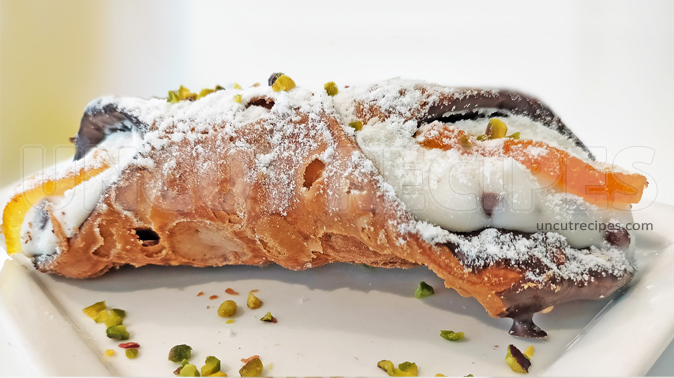 TRADITIONAL ITALIAN RECIPE: Although Cannoli have been traced to the Arabs during the Emirate of Sicily, with a possible origin for the word and recipe deriving directly from qanawāt, today we established that Cannoli comes from the Palermo and Messina areas and were historically prepared as a treat during Carnevale season, possibly as a fertility symbol; one legend assigns their origin to the harem of Caltanissetta. The dessert eventually became a year-round staple throughout Italy.

Personally, i don't like Cannoli. I like to eat plain Ricotta, with a dust of regular sugar on top. That's it. When you put Ricotta on Pizza, or into cakes, it just pisses me off so much.

I travelled to Sicily in 2014 to do some "Cannoli Research" and i could not stand the fact they put Ricotta everywhere. In the south Ricotta is like Tomato Sauce in the North. ( It is not... but this was my feeling ). I really did not enjoy that at all.

A friend of mine, from Naples ( i'm from Milan ), kept telling me "eat this, eat that" without understanding the fact tastes are very much personal... and the more you push someone to eat something they don't want, the more you actually piss them off. I acted nicely and faked to try a little of everything. Never giving a bite! :D

I love cooking for others, tast from time to time... but i don't like to be pushed.
But this is all about personal tastes.

I haven't done this recipe for a long long time. Before publishing it I just wanted to get things right and do some research where necessary.

Sicilian cannoli (cannoli siciliani) is one of the most classic desserts from Sicily and every Sicilian family who emigrated abroad in the early 1900’s, took great care to have the recipe in their pocket!

Wherever you go in the world, if you find a Sicilian family, then you can be sure they know how to make cannoli.

This year i travelled twice to New York during my "Cannoli Research", and found out that Cannoli in the US are as famous as in Sicily. There, just like in Sicily, I came across many variations.

Many times, when I published my recipes, I keep telling you guys that in Italy the same recipe could change from province to province, town to town and even from civic number to civic number; that’s Italy, we cannot help adapting recipes! Just like it happens in any other cuisine and country.

However, This is the ORIGINAL SICILIAN CANNOLI RECIPE made following the Sicilian tradition and cuisine.

01 - Put the ricotta cheese in a strainer to drain and keep it in the fridge for a while.

02 - In a bowl mix flour, Sugar, Cinnamon, Coffee, Salt and Cocoa Powder and sift everything.

03 - Add the lard, the egg, the Vinegar and Marsala Wine. The resulting dough MUST be soft and firm, therefore you may not need to use all the liquids. It should be a bit harder than bread dought.

04 - Knead the dough well, a lightly floured worktop will be fine, until you reach the right consistency. Wrap it in cling film and let it rest in the fridge for at least 1 hour.

05 - Put the well-drained ricotta cheese in a bowl. Mix it and add the sugar.
( Mix just enough to blend the ingredients )

06 - Cover the bowl containing the mixed Ricotta with cling film and put in the fridge for half an hour.

07 - In order to obtain a smooth cream place a very fine sieve over a bowl, add the ricotta and sugar mixture and press down with a small spatula.

08 - Add the Candied Citron and Orange chips. Mix everything and cover the bowl with cling film and keep in the fridge.

09 - Now take the dough for the cannoli shells out of the fridge and roll it out to a sheet about 2mm / 0.07in thick.

10 - Use a round cookie cutter ( or a large glass ) about 9mm / 0.3in in diameter and cut out a circle ( or simply cut a square/diamond shape ). Stretch it into an oval and take one of the tubes for the shells. Brush it with egg white to stick the ends together.

12 - Fry no more than two shells at a time to avoid to cool down the oil.

13 - Once the shell is ready let it cool and gently remove the extra oil with some paper if needed, and remove the metal tube.

- If the ricotta has an excess of liquid, drain it over a strainer for at least a half an hour before making the filling.

- After STEP 13, you can cover the inside of the shell with Chocolate and let it cool in the fridge for 30 minutes (this is optional).


- Fill the cannoli only at the moment of serving to have them crispy.

- You can store the Cannolis ( or shells and cream separated ) for 36 hours in the fridge inside a sealed glass container ( do not use a plastic container ).