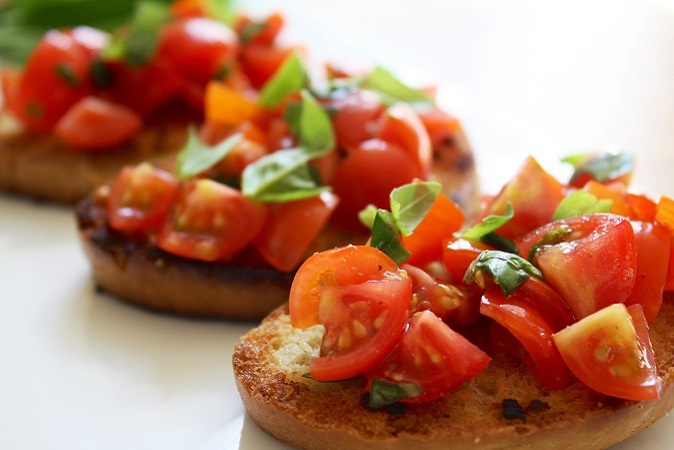 TRADITIONAL ITALIAN RECIPE: The best way to describe a Bruschetta ( Pronounced "Brusketta" )is... mmmm... bruschetta is a sandwich for smart people. It's healthy, 100 percent natural and won't get you fat. Don't even start saying "Uuuh, what about the bread carbohydrates?", before you worry about the carbohydrates of a couple of slices of bread, stop eating Mc Donald's, Sweets, Chocolate, Crisps, Coca Cola and so on. Seriously. Unless you are one of those walking to a Fast Food restaurant demanding a kind size menu... and DIET COKE! AHAHAHAH

Back to serious talking... this classic Italian appetizer is a perfect way to capture the flavors of garden ripened tomatoes, fresh basil, garlic, and olive oil. Think of it as summer on toast!

In Italy Bruschetta is normally made using Altamura Bread ( or Pane di Altamura ), but that never a rule, which has a thick dark colour crust and has a higher water content than usual in the dough. The thick crust retaines the moisture in the bread, meaning it can be used up to a week after purchasing.

Altamura Bread is made from durum flour from the Altamura area of the Provincia di Bari, in the South East of Italy. In 2003 Pane di Altamura was granted PDO status within Europe.

By law, it must be produced according to a range of strict conditions, including using particular varieties of wheat, a certain specification of water, and a consistent production method, and must also have a final crust more than 3mm thick. However, the shape of the bread is not important.

Have a look round a farmers' market or in a good supermarket and you should be able to find something alike. If you can't, a good-quality round sourdough bread will give you good results.

The bread is best sliced 2cm / 0.7in thick and toasted on a grill.

You can lightly rubbe each slice a couple of times with a cut clove of garlic, then drizzled with some good extra virgin olive oil ( although I personally suggest you to drizzle the Oil on top of the Tomatoes... but you can do whatever you want! PEACE! ) and sprinkled with salt and pepper.

Make sure your tomatoes are really ripe when making this topping. Give them a quick wash with hot water to better remove chemical residue, remove their cores and carefully squeeze out the seeds ( which you will not be able to digest anyway, and eventually poop them out... which is always, literally, "a pain in the ass if you suffer from hemorrhoids" ).

01 - The Bread is best sliced 1cm / 5in thick and toasted on a barbecue, but it can also be done in a griddle pan for ease at home.

02 - Give the Tomatoes a wash, remove their cores and carefully squeeze out some of the seeds. Then chop them.

03 - Drizzled the Bread with some good Extra Virgin Olive Oil and sprinkled with Salt and Pepper.

- You can add some Garlic to give some extra taste to your Bruschetta. After Direction Number 01, lightly rub the toasted Bread a couple of times with a cut clove of Garlic.