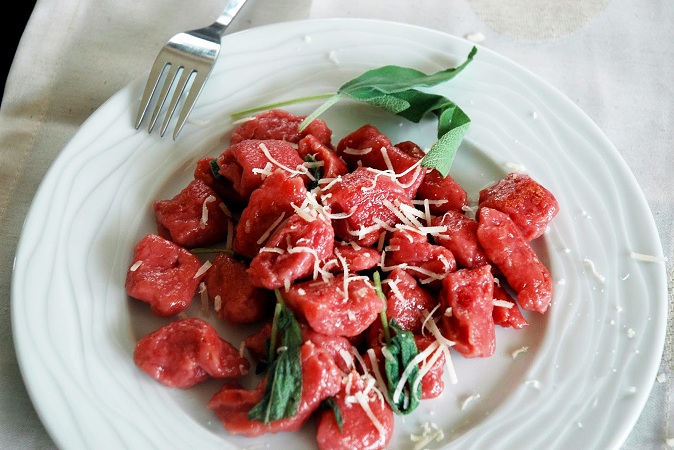 TRADITIONAL ITALIAN RECIPE: Beets are a member of the Amaranthaceae family that includes chard, spinach beet and sugar beet (and here I thought they were related to turnips). They have been cultivated since the 2nd millennium BC, beginning in the Mediterranean and moved through Babylonia, reaching China by 850AD.

I read that 4 charred beetroots were found in ruins in a Neolithic site in the Netherlands (they were smaller than our modern cultivated variety). The earliest mention of beets is in 8th century BC Mesopotamia.

Gnocchi have an ancient history as well. The theory is that gnocchi originated in the Middle East and were brought to Europe by the Romans where they were made with a “porridge-like” egg dough according to Wikipedia. The potato addition is fairly recent since it didn’t happen till potatoes were brought from the New World in the 16th century. Gnocchi exist in Italy, France, Sardinia and Croatia in various forms. The word may come from nocchio (knot) or nocca (knuckle).

Gnocchi are a lot easier to make that one would think. The dough is made of mashed potatoes, flour and eggs. The preparation is very basic. The gnocchi bathe in boiling water for a few minutes.

To make it more fun and playful for the kids to eat, I used beets. We eat with our eyes first, and the vibrant color of this dish is sure to capture the attention of even the pickiest eater. After the reception it got from my girls, I expect I'll be making it fairly often.

01 - The first thing to do is to boil the Potatoes in their skins and the peeled Beetroots.

02 - After about 25 Minutes turn the heat off and tip them into a colander to drain.

03 - While still hot peel the skin off the Potatoes.

04 - Pass the Potatoes and the Beetroots through a potato ricer.

05- Let the mash cool slightly and then sprinkle over the Flour, add 2 generous pinches of salt, and finally pour in the egg.

06 - Use your hands to mix it together. After a minute or two it will form into a Dough. Knead lightly. When it reaches a pliable consistency, it's ready.

07 - Sprinkle the surface with Flour. Slice a fist-sized piece from the Dough ball and roll out into lengths that are about 3cm / 1.1in thick.

09 - You can either leave the Gnocchi smooth or give the classic Gnocchi-shape by pressing the Gnocchi against the prong of a fork and rolling it off.

10 - Place the Gnocchi onto a tray, leaving a space between each piece to prevent them from sticking together.

11 - Boil some water in large and deep pan. Add some salt.

12 - In a large pan melt the Butter and saute the Sage for 2 minutes.

13 - Tap the Gnocchi from the tray into the boiling water. This method will stop the water from splashing your hands. Give them a little stir and leave to cook.

14 - When the Gnocchi have all bobbed to the surface wait 1 extra minute and they're ready to serve.

15 - Scoop them out with a sieve, shake off the water and transfer them into the large pan.

16 - Mix the Gnocchi with the Butter and Sage Sauce. Serve.

- The size of the Gnocchi can vary as desired.

- You can leave them as they are, even without the lines.

- Sprinkle some Flour on and put them in the frige for 24 hours. Remember, Gnocchi contain Eggs, so the sooner you eat them, the better.