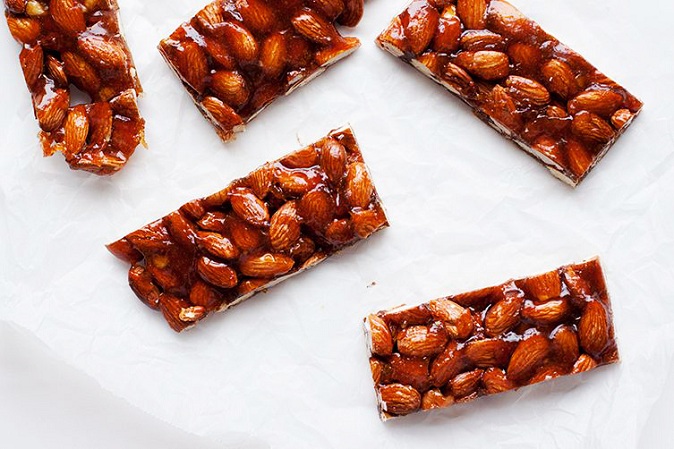 TRADITIONAL ITALIAN RECIPE: The Italian pasticceria is found on almost every corner in every city in Italy, they are purveyors of pastries, sweets, desserts and all things good. One of the many delicacies that Italy showcases especially during Christmas is torrone. Not only a prerogative of Italy as it is present in Spain, Latin America and Philippines, torrone in Italy has been interpreted in different varieties according to many Regional traditions.

Torrone – nougat – is a confection typically made of honey, sugar, egg white and toasted almonds (or other nuts) made into a rectangular shape. It dates back to Roman times, but the original recipe as imported by the Arabs who had a presence in Spain and Southern Italy.

Legend has it that torrone was first served at Francesco Sforza’s and Bianca Maria Visconti’s wedding banquet in Cremona on October 25th 1441. It is said that on that day, torrone was born as the result the cook’s mishap, a common origin of many Italian delicacies to be honest.

Legend also has it that its name comes from its shape, when upright, the torrone looks like a tower (torre in Italian), the name was originally given to the confectionary from Cremona. In truth, the term’s origin comes from Latin “torrere”, “to toast”, because of the almonds and nuts toasting process that making torrone involves.

What are the different types of torrone found in Italy?

It is mainly divided in two corners torrone, in terms of preparation and in terms of people’s tastes. Some prefer the softer more chewy version, while others the crumbly harder texture.

To obtain the hard and crunchy type the ingredients are cooked for 12 hours. For the soft and chewy one the mixture is not cooked longer than 2 hours creating more humidity which allows for a softer texture.

Torrone can also be made with almonds or with hazelnuts and some are even coated – or made – with chocolate.

And again, the torrone fans are divided between hazelnuts and almonds. There’s a third type too called “pasta reale” made with almonds paste coated with sugar or chocolate.

Where can you find the best torrone in Italy?

Vergani in Cremona opened – according to some – in 1881 and makes a big variety of torrone. The one with dried fruit is delicious.

Venice, Scaldaferro its a safe bet and uses different kinds of salted honey to produce its torrone, along with the classical version.

In Piedmont the king of torrone is Relanghe: located in Castellinaldo, Cuneo, they use only the highest quality of hezelnut, premium caliber of the IGP Piedmont Hazelnut, also known as the Tonda Gentile Trilobata.

In Benevento, Campania, torrone is an ancient tradition: Alberti produces a vast range of interpretations, the most particular? One which celebrates a most renowned regional product, the Strega liquor. The torrone Strega is made with honey, Avellan Hhzelnuts, the distinctive aroma of Strega Liquor, and a coating of finest bittersweet chocolate

Also in Campania, in the province of Naples, at Frattamaggiore, Antica Grimaldi still follows the secret passed on by the founder, Luigi Grimaldi, to heirs Titina e Raffaelina who use only natural ingredients without preservatives and steam cooks the torrone with artisanal machines and a copper boiler.

Caffe Sicilia in Noto, Sicily, probably the most renowned pastry shop in Italy by the pastry chef Corrado Assenza produces also – needles to say – one of the best torrone with the renowned white almonds of Noto

Geraci, in Sicily, has been producing torrone since 1870 and its still made in the artisanal way in Caltanissetta.

02 - Place the pot on medium heat and with a wooden spoon stir continuously clockwise for about 20 minutes, or until the Sugar has crystallized.

03 - Once the Sugar has completely melted and crystalized remove it from flame and pour the entire content over a greased ( with regular Olive Oil ) Sheet of Oven Liner Sheet or Kitchen Foil.

04 - With a spatula, quickly flatten the Almonds to an even sheet and let it rest for 5 minutes.

05 - Move now the Almond Sheet to a chopping board.