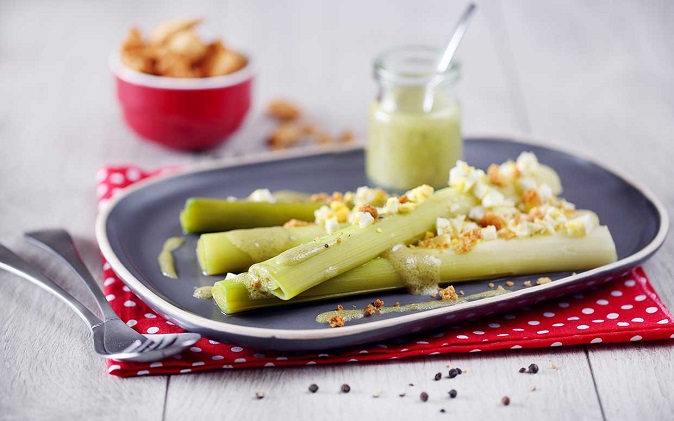 TRADITIONAL FRENCH RECIPE: This is an easy traditional french recipe for Marinated Leeks with Hearbs.

The origin of this dish is unknown, but the dressing and the egg, suggest a french origin. Whether the french invented or not this recipe, they certainly perfectionated it, because to my knowledge, there is no better or closer version.

One thing to keep in mind if you are ordering this dish at a restaurant, Leeks have all the advantages: they're nourishing, tasty and super cheap. So, if there is a 50 dollars price tag attached to it... it is not worth it, because here is the traditional french recipe for Poireaux Vinaigrette ( Marinated Leeks with Herbs )... so, from now on, you can make it at home.

Save money! Beat the system! ;)

02 - Chop the root off the Leeks and slice lengthwise, but not all the way through.

03 - Open the Leeks like a book and wash well in cold running water to remove dirt.

04 - Bring a large skillet filled with Salted Water to a boil.

05 - Add the Leeks, and cook over medium heat for about 5 minutes, or until just soft.

06 - Transfer leeks to a large bowl of ice water to stop them from cooking further.

07 - Now you can lengthwise-split open the Leeks and transfer to a rack, cut side down, to drain thoroughly.

08 - While the Leeks drain, chop the boiled Egg and set aside.

09 - In a bowl, whisk Vinegar, Mustard, Salt and Pepper together.

10 - Slowly add the Peanut Oil, whisking constantly, until you obtain a smooth cream. Season, and set aside.

11 - Remove the leaves from half the Parsley Sprigs. Chop the leaves and set aside.

13 - Drizzle Vinaigrette over Leeks, and sprinkle with chopped Parsley and chopped Egg.

14 - Garnish each plate with a sprig of Parsley.