TRADITIONAL FRENCH RECIPE: Pain au chocolat, chocolate bread, also known as chocolatine in the south-west part of France and Canada, is a viennoiserie sweet roll consisting of a cuboid-shaped piece of yeast-leavened laminated dough, similar in texture to a puff pastry, with one or two pieces of dark chocolate in the centre.

Pain au chocolat is made of the same layered dough as a croissant. Often sold still hot or at least warm from the oven, they are commonly sold alongside croissants in French bakeries and supermarkets.

Legend has it that Marie-Antoinnette introduced the croissant to France, but croissants and pains au chocolat are a relatively modern invention. The word croissant, which refers to a plain form of pain au chocolat shaped like a half-moon or "crescent", made its entry in the French dictionary in 1863.

The type of pastry, called "viennoiserie" in French, was introduced in the early 19th C. when August Zang, an Austrian officer, and Ernest Schwarzer, an Austrian aristocrat, founded a Viennese bakery in Paris located at 92 rue Richelieu. It is a dish often made at brunches. It is known as the food of romance and of course Paris is the city of love.

Originally, croissants and pains aux chocolat were made from a brioche base but later evolved to incorporate a buttery flaky dough ('pâte feuilletée).

01 - Divde the Water into 2 cups. Now, dissolve the Active Dry Yeast in one cup.

02 - Dissolve the Salt in the other cup.

03 - In a bowl combine the two Flours, add the Sugar, the Powdered Milk and the Softened Butter.

04 - Move the Flour mixture into a mixer and beat in the Yeast and Water mixture for about 1 minute.

06 - Once the Dough comes together, remove the paddles and insert the dough hooks, and beat at medium speed for at least 10 minutes or until the Dough is cleaar and gathers around the hooks.

07 - Wrap the bowl with cling film and place in the fridge to rest for 2 hours:

09 - Place the Butter in between a long piece of cooking paper and flat it using the rolling pin into a rectangle half the size of the Dough. Make sure the room is not too hot and the Butter was kept inside the fridge, because you'll need the Butter to be firm, not soft. Leave a 1cm / 0.5in border uncovered. 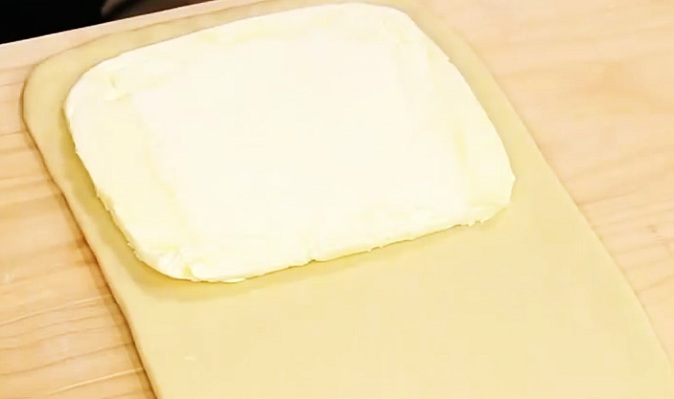 10 - Fold the Dough, covering the Butter, lightly press the sides and dougle the lenth of the rectangle by rolling the rolling pin up and down until the Dough is about 5 to 7mm / 0.25in thick.

11 - Fold the Dough 4 times. First fold the bottom quarters up to the middle then again in half. 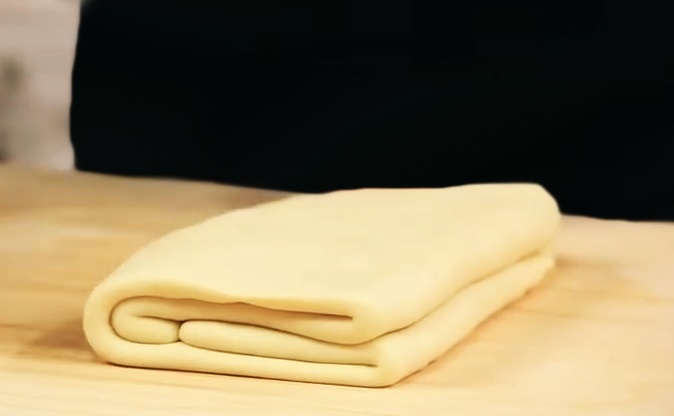 12 - Wrap the folded dough with cling film and place in the fridge for 1 hour.

14 - Fold the dough 3 times, wrap it with cling film and place it in the fridge to rest for an extra hour. 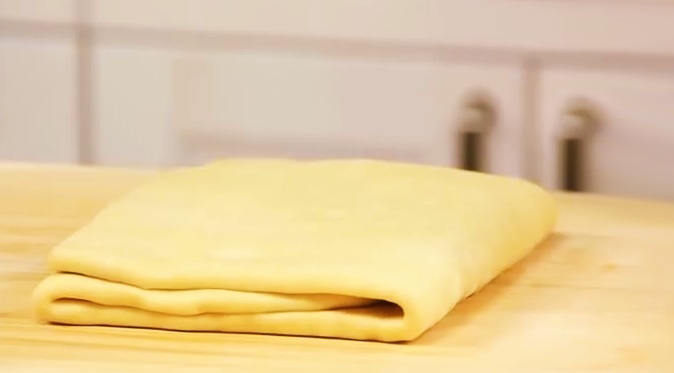 15 - The easiest thing to do at this point is to cut the Chocolate Bar into Sticks 8cm / 3in long.

17 - Cut the Dough into 10 pieces. Cut it furst in half ( lengthwise ) and then in 5 smaller rectangles. 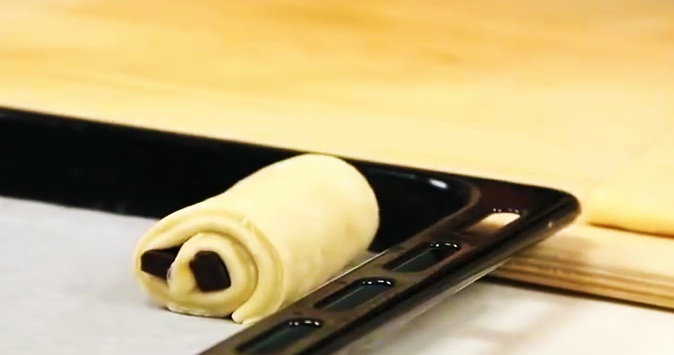 20 - Place the tray inside the oven for 2.5 hours allowing the Dough to rise.

22 - Remove and place on a oven rack to cool outside the oven. Serve.