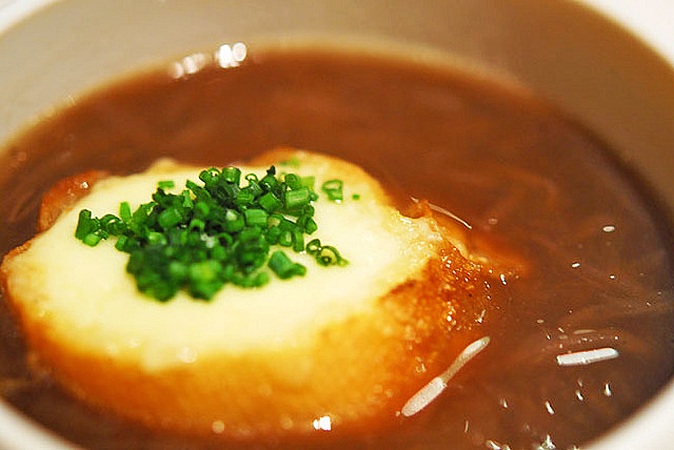 TRADITIONAL FRENCH RECIPE: Onion soups have been popular at least as far back as Roman times. Throughout history, they were seen as food for poor people, as onions were plentiful and easy to grow.

The modern version of this soup originates in France in the 18th century, made from beef broth, and caramelized onions. It is often finished by being placed under a grill in a ramekin with croutons and Comte melted on top. The crouton on top is reminiscent of ancient soups (see history of soup).

Recipes for onion soup vary greatly: though the liquid is usually meat stock, it may be simply water. Milk may be added. It may be thickened with eggs or flour. It may be gratinéed or not.

Generally, recipes specify that the onions should be cooked slowly, becoming caramelized. Brandy or sherry is added at the end.

The soup base is often topped with a slice of bread (a "croute" or "crouton"). For the gratinéed version, the croute is topped with cheese and broiled or baked.

The soup is then immediately served in the bowl or ramekin in which it was broiled (or, in the United Kingdom, grilled), baked, or—in family-style—immediately transferred to individual serving bowls via a ladle.

One of the most common beliefs surrounding French onion soup is that the onions must be cooked to a deep, deep, dark, dark, mahogany brown. I'm going to start off by calling BS on that premise. It's not that I think it's wrong to caramelize the onions darkly, I just don't think it's necessary for great results.

I also think there's a big risk going very dark: unless you're exceedingly careful, it's very easy to introduce unpleasantly bitter flavors to the onion—one of the culprits in so much of the bad French onion soup out there.

Do not think for a minute that this is the notorious soup you get in Paris workingmen's cafes at five o'clock in the morning...In those soups the onions are sautéed until they are black, and the soup is dark and bitter. Some people like it that way, but this is very hard to reproduce and still have the right taste at home.

Sweet onion: mellow and sweet, with a brightness right at the end.

Yellow onion: lots of bright flavor, very mild bitterness, and a sweetness backing it up.

Shallot: really good balance of sweetness with both bright flavors and deep, rich ones, and just a hint of bitterness.

Caramelization can be a wildly inconsistent process. Different pots and pans, batch sizes, and fats all change how (and how quickly) onions caramelize.

Contrary to almost every recipe and chef belief, onions do not caramelize in 15 minutes. They also don't caramelize in 25 minutes. And unless you're cooking a very small batch, you'll be lucky if they're done in 45 minutes.

Yes, over high heat, onions can brown on the surface very quickly, especially in a pan that's not crowded. But the goal of caramelizing onions isn't just to brown the surface, it's to transform the onions so that they are soft and sweet to the core.

Try to rush it and all you'll end up doing is burning them.

It sometime takes at least an hour, sometimes two.

01 - Mixed the crushed Garlid and the Oil together.

02 - Into a large baking pan, drizzle the Olive Oil mixture on the Baguette slices.

04 - Place a saucepan ( or casserole ) on a high heat and melt the Oil and Butter together.

05 - Add the Onions, Garlic and Sugar to the saucepan and saute' for about 5 mnutes, without burning.

06 - Reduce the heat of the saucepan to its lowest and let everything cook slowly for about 20 minutes.

07 - Once everything has caramelized, pour in Beef Stock and Dry White Wine, and Season, stirring with wooden spoon and simmering without lid on for about 1 hour.

10 - Remove the soup bowls from the oven and pour in the soup.

12 - Sprinkle the grated Gruyère over the Baguette slices ( or Croutons )

13 - Place the whole lot under the grill until the Cheese has melted or golden brown. Serve.

- You can decorate the soup with some Scallion.