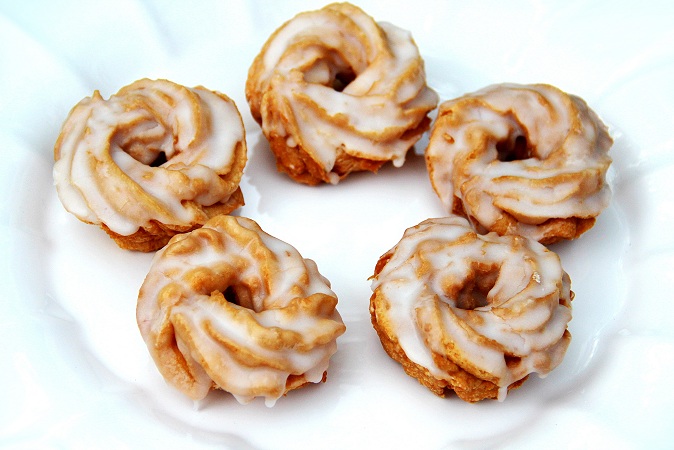 TRADITIONAL FRENCH RECIPE: A traditional cruller (or twister) is a french/german fried pastry often made from a rectangle of dough, with a cut made in the middle that allows it to be pulled over and through itself producing twists in the sides of the pastry. Crullers have been described as resembling "a small, braided torpedo" and having been "a staple of the New England diet since the Pilgrims' day".

Some other cruller styles are made of a denser dough somewhat like that of a cake doughnut formed in a small loaf or stick shape, but not always twisted.

Crullers may be topped with plain powdered sugar; powdered sugar mixed with cinnamon; or icing. However, a "French cruller" is a fluted, ring-shaped doughnut made from choux pastry with a light airy texture.

Crullers are most commonly found in France, Canada, New England and the Mid-Atlantic and North Central states of the United States, but are also common in California.

The German origin is probably why traditional crullers can be found more easily in the Midwest, where many German immigrants settled. Some family-owned bakeries still call them "krullers." In other parts of the U.S., crullers may be called "dunking sticks" or simply "sticks."

In 2003, the Dunkin' Donuts chain of doughnut shops stopped carrying traditional crullers, claiming that the hand-shaped rectangular treats were too labor-intensive, and couldn't be simulated with new machines for mixing doughnut batter. The company still sells "French Crullers" which can be formed by a kind of extruding nozzle.

Tim Hortons, and Honey Dew Donuts still sell the Cruller doughnut. Krispy Kreme sell something that they call a cruller, but in reality it is just a molded/formed cake (or Old Fashioned) doughnut. In place of the traditional cruller, Dunkin' Donuts now sells several variations of a substitute product it calls a "cake stick" which is a simplified, machine-made version of the more elaborately twisted, hand-made variety.

In the southeastern U.S., French crullers are a fresh-baked everyday bakery item at Publix grocery stores.

The term "Chinese cruller" is occasionally applied to the youtiao (Chinese: 油条), a similar-looking fried dough food eaten in East and Southeast Asia.

The term cruller is also associated with the mahua (Chinese: 麻花). Mahua is a type of twisted fried dough much denser and sweeter than youtiao.

The "Aberdeen Crulla" is a traditional Scottish pastry made in the same way as the rectangular, plaited cruller of New England.

One derivation of the name is from the Scots "Crule", a small cake or bannock, which may in turn derive from the Danish or Norwegian for "curl" or the Norwegian for "hump".

Distinct from this, the "yum-yum" is a commonly available treat in Scotland, which resembles a straightened French cruller coated in thin glace icing.

01 - Place the Water, Butter, Sugar, and Salt in a pot and bring to a brisk boil over medium high heat.

02 - Add the Flour, slowly, and stir until it is well incorporated.

03 - Cook and stir for about 4 minutes to steam away as much water as possible.

04 - Once a thin film coats the bottom of the pan, you can turn off the heat.

05 - Using an electric mixer, stir the mixture for about 1 minute to allow it to cool.

07 - Mix everything completely and then add the remaining Eggs, one at a time, and mix the best you can.

08 - Now, add the Egg Whites, a little at a time, until the paste becomes smooth and glossy and will hold a slight peak when pinched with your fingers.

10 - Cut out twelve 8x8cm / 3x3in squares of parchment paper and lightly grease them.

13 - Once the Oil is ready, place one Cruller at a time in the Oil ( paper side up ). Remove the paper with tongs and let it fry on each side until golden brown, 2 to 3 minutes.

14 - Remove the Crullers with a punched spoon and drain on a paper towel for at 1 minute.

16 - Cool the Crullers on an oven rack until the Glaze has set. Serve.