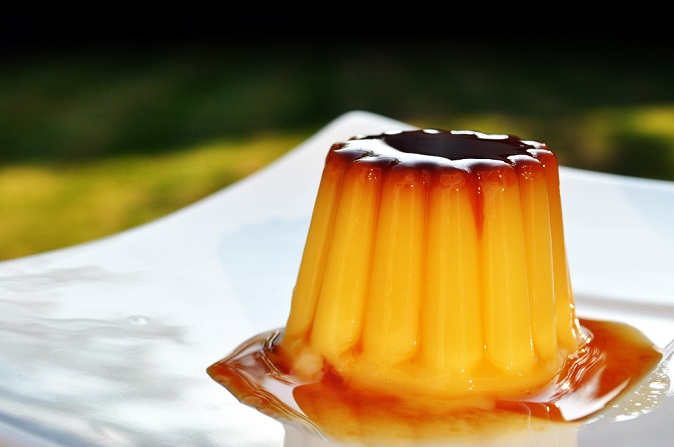 In the later part of the 20th century crème caramel occupied an excessively large amount of territory in European restaurant dessert menus. This was probably due to the convenience, for restaurateurs, of being able to prepare a lot in advance and keep them until needed.

Crème caramel is a variant of plain custard (crème) where sugar syrup cooked to caramel stage is poured into the mold before adding the custard base. It is usually cooked in a bain-marie on a stove top or in the oven in a water bath. It is turned and served with the caramel sauce on top, hence the alternate French name crème caramel renversée.

In Japan packaged crème caramel is found almost in all convenience stores under the name purin (プリン) (i.e., "pudding"), or custard pudding.

02 - In a saucepan, combine Milk and Vanilla and bring to a boil.

05 - In another bowl, whisk well the 3 whole Eggs and 1 Yolk and the Sugar together. Once the Egg mixture has become creamy mix it with the Milk and Cream mixture in the saucepan little by little.

06 - Using another saucepan dissolve the Sugar in Water. Do not stop stiring. Once the Caramel ( Sugar + Water ) becomes light-brown / dark-gold turn the heat off.

07 - Pour the Caramel in the moulds. Move the moulds side to side and turn them around to dirt the inside with Caramel. Let the Caramel cool.

08 - Pour the Cream inside each mould.

09 - After pouring the mixture in the moulds, place them inside an oven safe dish filled halfway with hot water. The water should come to one third of the way up the sides of the moulds.

10 - Now, bake for about 45 minutes. Once the Crème Caramel has harden, remove the dish from the oven, remove the moulds from the dish and let them cool at room temperature.

11 - Chill the Crème Caramel for at least 4 hours in the fridge before serving.

- To remove the Crème Caramel out of its mould run a thin knife along the edges of the mould and place it upside-down on a plate.

- If you want to twist the recipe ( at direction number 2 ) add a Lemon Zest.

- You can serve the Crème Caramel with some Whipped Cream and Strawberries or Biscuits.