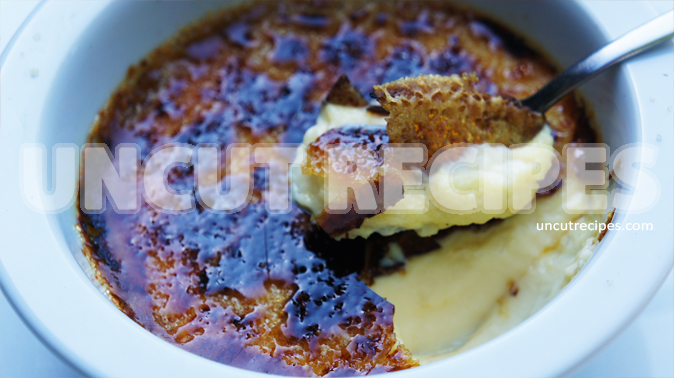 TRADITIONAL FRENCH RECIPE: This recipe will help you making an awesome Creme Brûlée that would is served in a restaurant.

Oh Yes, this is the traditional french recipe for Creme Brulee.

In Catalan cuisine, crema catalana ("Catalan cream") or crema cremada ("Burnt cream"), is a dish similar to crème brûlée. It is traditionally served on Saint Joseph's Day (March the 19th) although nowadays it is consumed at all times of the year. The custard is flavored with lemon or orange zest, and cinnamon. The sugar in crema catalana is traditionally caramelized under an iron broiler or with a specially made iron, not with a flame.

"Leite Creme" is a similar Portuguese dessert; the name is also used for crème caramel.

The earliest known reference to crème brûlée as it is known today appears in François Massialot's 1691 cookbook, and the French name was used in the English translation of this book, but the 1731 edition called the same recipe crème anglaise 'English cream'.

In the early eighteenth century, the dessert was called "burnt cream" in English.

In Britain, a version of crème brûlée (known locally as "Trinity Cream" or "Cambridge burnt cream") was introduced at Trinity College, Cambridge, in 1879 with the college arms "impressed on top of the cream with a branding iron", though crème brûlée itself was not invented at Cambridge.

The story goes that the recipe was from an Aberdeenshire country house and was offered by an undergraduate, to the college cook, who turned it down. However, when the student became a Fellow, he managed to convince the cook to serve it.

02 - Pour the Cream into a small pan and cut the Vanilla Pod in half lengthways.

05 - Meanwhile, combine Yolks and Caster Sugar into a heatproof bowl and stir until smooth and well mixed.

06 - Back to the Cream, left at Direction N. 04: when the Cream begins to boil, remove the Vanilla Pod and pour the Cream on to the Yolk and Sugar mixture, stirring constantly.

07 - Divide the Mixture between the ramekins and pour cold water into the tin until it comes two-thirds of the way up the ramekins.

11 - Using a blowtorch or hot grill, caramelise the tops. Serve.

- If using a grill to caramelise the tops ( at Direction 11 ), you will have to put them back in the fridge for half an hour before serving.