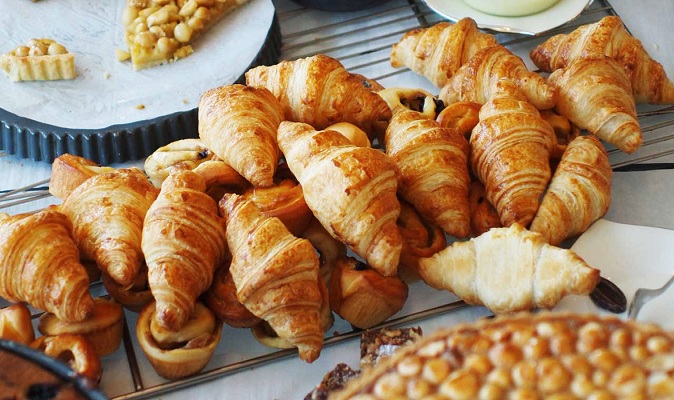 TRADITIONAL FRENCH RECIPE: Brioches come with so many different shapes. Some look like croissants and others like little puffs.

Brioche à tête or parisienne is perhaps the most classically recognized form: it is formed and baked in a fluted round, flared tin; a large ball of dough is placed on the bottom and topped with a smaller ball of dough to form the head (tête).

Brioche Nanterre is a loaf of brioche made in a standard loaf pan. Instead of shaping two pieces of dough and baking them together, two rows of small pieces of dough are placed in the pan. Loaves are then proofed (allowed to rise) in the pan, fusing the pieces together. During the baking process the balls of dough rise further and form an attractive pattern.

Brioche can also be made in a pan without being rolled into balls to make an ordinary loaf. Brioche dough contains flour, eggs, butter, liquid (milk, water, cream, and sometimes brandy), leavening (yeast or sourdough), salt, and sometimes sugar. Common recipes have a flour to butter ratio of about 2:1.

The normal method is to make the dough, let it rise to double its volume at room temperature and then punch it down and let it rise again in the refrigerator for varying periods (according to the recipe), retarding the dough to develop the flavor.

Refrigeration also stiffens the dough, which still rises, albeit slowly, making it easier to form.

The dough is then shaped, placed in containers for the final rise (proof), and the tops are generally brushed with an egg wash just before baking to give the top a burnished sheen during baking, and then baked at 230 °C (446 °F) until the crust browns (Maillard reaction) and the interior is done (reaches at least 90 °C).

The first rise time for small rolls is 1 to 1½ hours, for larger brioche the time is lengthened until the loaves double.

02 - Meanwhile, cut the butter in little pieces to soften the butter.

08 - On a floured surface, roll the Dough out in a flat sheet 1cm / 0.4in high, cut little triangles and starting from their base, roll the triagles up giving each piece the classic Brioche shape.

09 - Place everything on an oven tray coverd with oven papaer.

11 - Using a new clean bowl, mix the Egg Yolk and the Milk and glaze each Brioche with a thin layer of mixture.

12 - Set aside, let the Brioche rest for 1.5 hour or till their volume has doubled.

14 - Remove the Brioches from the oven and let them cool on an oven rack.