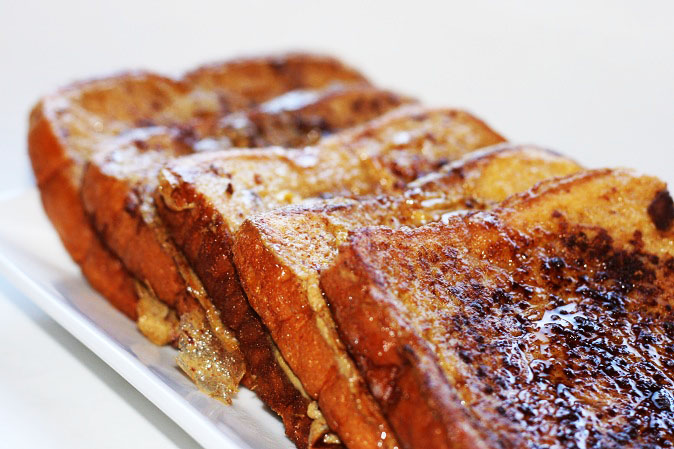 TRADITIONAL FRENCH RECIPE: In France, pain perdu may be eaten as a dessert, a breakfast, or an afternoon tea snack ("goûter").

Slices of bread are soaked or dipped in a mixture of beaten eggs, often with milk or cream. Sometimes sugar, cinnamon, nutmeg, and vanilla are added to the mixture. The slices of egg-coated bread are then fried on both sides until they are browned and cooked through. Day-old bread is often recommended by chefs because the stale bread will soak up more egg mixture without falling apart.

The cooked slices may be covered with sugar or sweet toppings such as jam, honey, fruit, or maple syrup, or served as a savory dish with ketchup or another sauce.

The bread may be dipped in milk only, with the egg mixture added afterwards.

The bread may be soaked in various other liquids, such as wine, rosewater, or orange juice, either before or after cooking.

Formerly, the dish was eaten more as a soup than dry.

02 - In a small bowl mix Butter, Cinnamon and Sugar together.

03 - Spread each Slice of Bread with a portion of Butter mix. You can either Butter one side or both sides adding extra ingredients if you need so.

04 - Place all Slices on an oven rack and bake for about 5 minutes or until the Bread is golden, and the Butter-Cinnamon-Sugar mixture makes a caramelized crunch on top.

05 - Switch the oven off and half open its door and let the Bread cool inside.

06 - While the Bread Slices cool a bit, generously butter one or 2 baking dishes and place the Cinnamon Toasts inside.

06 - Whisk the Milk, Eggs, Salt and Vanilla in a second bowl.

07 - Pour the Milk-Egg mixture on the Cinnamon Toast in the baking dishes.

08 - Set aside, leaving the Bread absorbing the Milk mixture for 10-15 minutes.

10 - Cut in half and sprinkle some extra Cinnamon and Sugar on top. Serve.