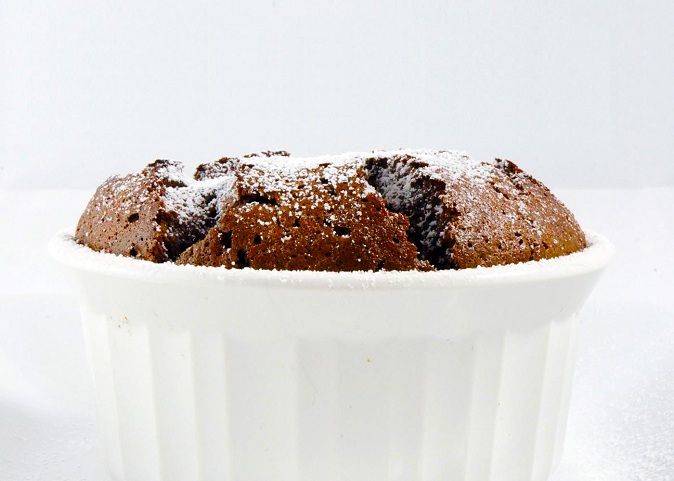 TRADITIONAL FRENCH RECIPE: These chocolate soufflés are an uber-decadent dessert and the perfect finishing touch to dinner parties or a quiet romantic dinner.

Soufflés may look like a restaurant-only dessert, but they are actually easy to make. Whip them up right after dinner and enjoy while they're still warm from the oven.

For those of you who don't know... the soufflé is a baked egg-based dish which originated in early eighteenth century France. It is made with egg yolks and beaten egg whites combined with various other ingredients and served as a savory main dish or sweetened as a dessert.

The word soufflé is the past participle of the French verb souffler which means "to breathe" or "to puff".

a flavored crème pâtissière, cream sauce or béchamel, or a purée as the base egg whites beaten to a soft peak.

The base provides the flavor and the egg whites provide the "lift", or puffiness to the dish. Foods commonly used to flavor the base include herbs, cheese and vegetables for savory soufflés and jam, fruits, berries, chocolate, banana and lemon for dessert soufflés.

Soufflés are generally baked in individual ramekins of a few ounces or soufflé dishes of a few liters: these are typically glazed, flat-bottomed, round porcelain containers with unglazed bottoms, vertical or nearly vertical sides, and fluted exterior borders. The ramekin, or other baking vessel, may be coated with a thin film of butter to prevent the soufflé from sticking.

Some preparations also include adding a coating of sugar, bread crumbs, or a grated hard cheese such as parmesan inside the ramekin in addition to the butter; some cooks believe this allows the souffle to rise more easily.

After being cooked, a soufflé is puffed up and fluffy, and it will generally fall after 5 or 10 minutes (as risen dough does). It may be served with a sauce atop the soufflé, such as a sweet dessert sauce. When served, the top of a soufflé may be punctured with serving utensils to separate it into individual servings. This can also enable a sauce to integrate into the dish.

03 - Sprinkle the bottom and sides of the ramekins with some extra Sugar.

05 - In a small saucepan, whisk together Cocoa Powder, ( Flour ) and one third of Sugar.

06 - Set the saucepan over medium heat an slowly, while whisking, add the Milk, the Chocolate and the Vanilla. Cook until the mixture has become smooth, which should take about 2 minutes.

07 - Remove the saucepan from the heat and cool for about 5 minutes ( don't forget to remove the Vanilla Bean ).

08 - In the meantime in a bowl, while you are waiting for the Chocolate Mixture to cool a bit, using a mixer, beat the Yolks and another third of Sugar until light and thickened enough that batter falls in ribbons when beaters are lifted ( this should take about 2-3 minutes ).

09 - Now, Fold the Yolks into the Chocolate Mixture and mix well to combine.

10 - Into another bowl, using an electric mixed at medium speed, beat the Egg Whites with a pinch of Salt ( and the Cream of Tarter ), for 4 minutes or until well combined and the mixture is able to hold soft peaks.

11 - Slowly, while still beating the mixture ( for an extra 2 minutes ), add the last third of Sugar.

12 - Pour the Egg Whites into the Chocolate / Yolks mixture, and fold until thoroughly combined.

13 - Divide the mixture between the ramekins and bake them for 15 to 17 minutes or until they have puffed up but still have a little giggle in the center. Serve immediately.

- You can use Cocoa Powder instead of Sugar in Direction 3.