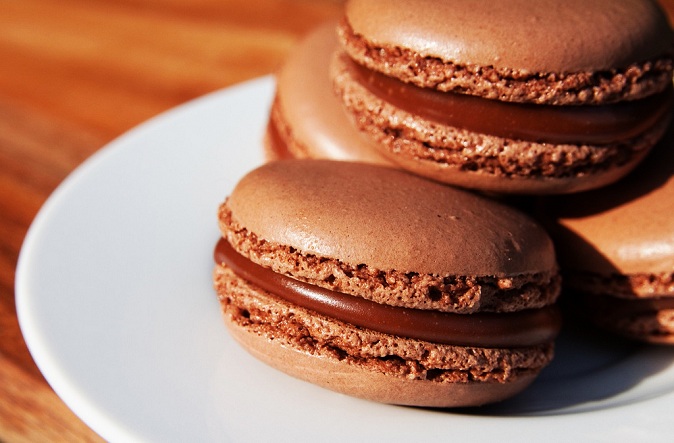 TRADITIONAL FRENCH RECIPE: The intricate confection is characterized by smooth, squared top, ruffled circumference (referred to as the "foot" or "pied"), and a flat base. It is mildly moist and easily melts in the mouth.

Macarons can be found in a wide variety of flavors that range from the traditional (raspberry, chocolate) to the new (foie gras, matcha).

They are often said to be difficult to make.

The macaroon is often confused with the macaron; many have adopted the French spelling of macaron to distinguish the two items in the English language. However, this has caused confusion over the correct spelling. Some recipes exclude the use of macaroon to refer to this French confection while others think that they are synonymous.

In reality, the word macaroon is simply an Anglicisation of the French word macaron (compare balloon, from French ballon), so both pronunciations are technically correct depending on personal preference and context.

In a Slate article on the topic, Stanford Professor of linguistics and computer science, Dan Jurafsky, indicates that "macaron" (also, "macaron parisien", or "le macaron Gerbet") is the correct spelling for the confection.

02 - Into a large bowl mix well the Almond Meal, Icing Sugar and Cocoa.

03 - Pour 1 portion of Egg Whites, Coffee and Vanilla over the Almond Meal mixture without mixing and set aside.

04 - In a saucepan, put the Caster Sugar and Water and stir well. Place over a medium heat. When the Sugar reacher 120C / 248F turn off the heat.

05 - Very quickly, using another bowl and an electric mixer, mix the remaining portion of Egg Whites at high speed until they form very soft peaks.

06 - While the Egg Whites are being beaten at high speed, pour the sugar syrup in, very slowly and continue to beat until the mixture cools.

07 - Now, fold this mixture into the Almond Meal mixture until well incorporated and smooth.

08 - Spoon everything into a piping bag fitted with medium round nozzle and pipe small 3cm / 1in rounds of mixture onto the lined trays, allowing a little room for spreading. And start squeezing the Macarons on the tray.

09- Set the trays of macarons aside for about 30 minutes so they can develop a thin skin.

11 - Bake the Macarons for about 12 minutes, opening the door at the 8 minute mark and the 10 minute mark, letting out excessive steam. When they over-grow and you can gently lift one off the tray without leaving anything behind, they are ready.

For the Chocolate Cream:

13 - Bring to boil the Cream and pour in the chopped Chocolate, stiring until the Chocolate is melted and incorporated with the cream.

14 - Turn the heat off and add the Butter to the Chocolate Cream and mix with an electric mixer or by hand until fluffy.

15 - Let the cream cool in the fridge for a while, until it becomes firm.

16 - Pour the Chocolate Cream into a piping bag fitted with a medium round nozzle.

17 - Sandwich everything together. Serve.