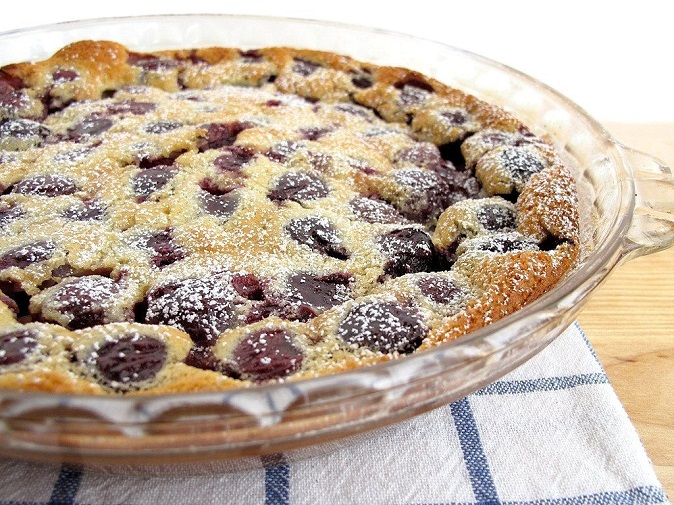 My ex-french-girlfriend's mother taught me how to make this traditional French recipe a decade ago, and I still make it from time to time. Cherry Clafoutis is literally one of the easiest desserts you can make.

This is a particular speciality of the Limousin region, where it's traditionally made with the local griottes, or sour morello cherries.

Small, tart griottes are not easy to come by, so do not dispear if you can't find them, just go for regular cherries.

The cherries are baked then in a flan-like mixture, made from eggs, flour, sugar and milk. Pretty simple. Not much work here. Some people ( that demand to be called chef ) scald the milk before use in the batter, while others use a mixture of milk and whipping cream. That's totally wrong if you follow the traditional recipe.

Over the years the recipe has changed quite a lot. In fact nowaday people use simple Vanilla extract, very easy to use and find, but the real TRADITIONAL recipe for Cherry Clafoutis requires 3 drops of almond essence and finely grated zest of half or 1 Lemon.

04 - Slowly add the Flour and mix until a smooth Batter has formed.

05 - Pour the Batter into the previously buttered skillet.

06 - Spread the Cherries evenly over the Batter.

07 - Bake for 30 minutes or until a skewer comes out clean and a golden brown crust has formed.