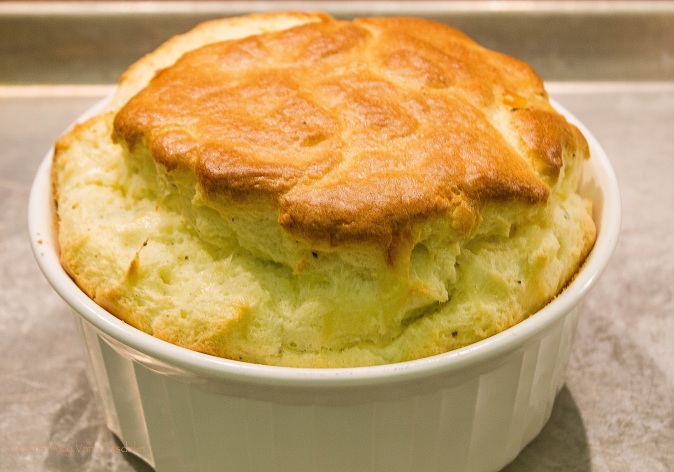 TRADITIONAL FRENCH RECIPE: The old french cheese soufflé is a dish that nobody, outside fance, seems to make anymore.

When I was learning to cook, that soufflé seemed like the ultimate challenge, and never was I more proud than when I made my first successful one. Maybe the french word, S-O-U-F-F-L-E, scares. Our western culture always tought us that good things are hard to make... but in the kitchen, good things are pretty simple, and Souffles are actually quite easy. But they do require the best eggs and cheese you can find.

Instead of Gruyère you can also use a mix of nutty-tasting Gruyère style cheeses; for example, use a mix of Comté (French Gruyère), Beaufort or Fribourg and Gruyère, or substitute Comté for all of the Gruyère.

If you cannot find some Gruyère, go with regular Cheddar. Not the same but sometimes ingredients are simply too hard to be found.

There are a number of both savory and sweet soufflé flavor variations.[18] Savory soufflés often include cheese, and vegetables such as spinach, carrot and herbs, and may sometimes incorporate poultry, bacon, ham, or seafood for a more substantial dish. Sweet soufflés may be based on a chocolate or fruit sauce (lemon or raspberry, for example), and are often served with a dusting of powdered sugar. Frugal recipes sometimes emphasize the possibilities for making soufflés from leftovers.

Another variation is an ice cream soufflé, which combines a soufflé with ice cream. Fruit or a hot dessert sauce, such as chocolate sauce, may also be used.

Soufflés are frequently depicted in cartoons, comedies and children's programs as a source of humor. Often this involves a loud noise or poke causing the soufflé to collapse, evoking the dejection of the character being served the anticipated dessert.

In the popular science fiction television show Doctor Who, companion Clara Oswald's echo Oswin Oswald was known to the Doctor as -Soufflé Girl-.

On the second season of HBO's award winning series True Blood; Maryann Forrester (a Maenad and main antagonist of the season) created and served the "Hunter's soufflé" which had a range of ingredients including rabbit, vegetables flambéd and a human heart. The unsuspecting Tara Thornton and Benedict Talley subsequently fell under the maenad's spell after consuming the morbid dish.

In The Brady Bunch episode "Vote for Brady," Alice bakes a soufflé. Throughout, the kids make various noises, none of which are sufficient to deflate it. However, the moment it's done baking, Alice knocks over a cutting board and it falls, much to her disappointment.

02 - Butter the soufflé dish and sprinkle in the Breadcrumbs. Rotate the dishes to ensure the Butter is evenly coated, and tip out the excess Breadcrumbs.

04 - Add Flour and Mustard. Gradually stir in Milk and mix until smooth. Keep stirring. Once it comes to boil, simmer for 5 minutes.

05 - Remove from heat and stir in the Cheese until melted.

07 - Stir the Yolks into a Sauce and combine with Gruyère Sauce. Season well with Cayenne Pepper and Nutmeg.

08 - Using a clean electric whisk to beat the Egg Whites, with a pinch of Salt, until peaks form that just hold their shape.

10 - Very slowly, spoon into the ramekins being careful not to fill them all the way to the top.

11 - Bake until puffed and browned. About 20 minutes. Add a cup of water into the oven to raise the humidity.

- You can use any kind of Cheese.