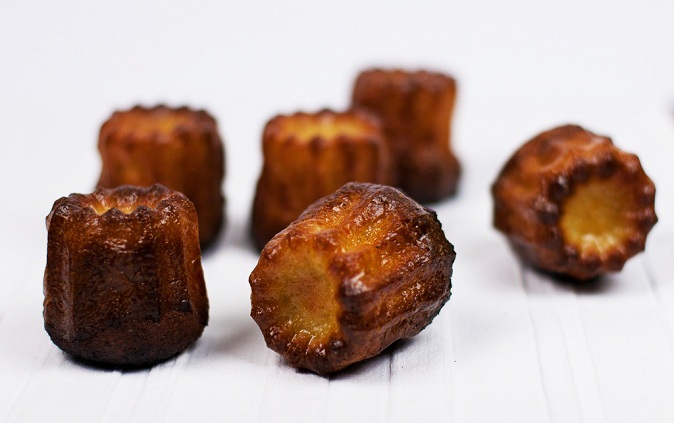 TRADITIONAL FRENCH RECIPE: The canelé de Bordeaux (a.k.a cannelé bordelais) is a magical bakery confection, a cake with a rich custardy interior ( or plain ) enclosed by a thin caramelized shell.

This is a brillian recipe, just like the brilliant construction developed long ago by an anonymous Bordeaux cook, whose innovation has been subjected to 300 years of refinements.

The modern word "canelé" originates in Gascon, which was spoken in Bordeaux and a large area of southwestern France until the 19th century, and in Limoges, there was a food called canole, a bread made with flour and egg yolks, which may be the same item as that sold in Bordeaux since the 18th century under the name of canaule, also written canaulé or canaulet.

Artisans known as canauliers who specialized in baking them registered a Corporation (or guild) with the Parliament of Bordeaux in 1663, which allowed only them to produce several specific foods: Blessed bread, canaules, and Retortillons. Since they were not a part of the Pastry Corporation (Guild), which had a monopoly over baking with milk and sugar or mixtionnée dough, they were prohibited from using those ingredients.

Nevertheless, in 1785 there were at least 39 canaulier shops in Bordeaux, at least ten of which were in the district of Saint-Seurin. The French Revolution abolished all the Corporations, but later census rolls continue to show shops of Canauliers and bakers of "blessed bread".

01 - Combine Milk, Vanilla and Butter and boil in a small pan.

03 - Add the Eggs to the Flour/Sugar mixture. Mix well till everything is well combine.

04 - Now, combine the bowl and the boiling Milk. Make sure to remove all the lumps. Stir slowly to obtain liquid Pastry Mixture or until it will have the same texture as pancakes.

05 - Let the Batter cool down and then add the Rum and mix.

06 - Cover with clean film and leave in the refrigerator for one hour or even all night. The more it rests the better.

08 - Pour in the Batter in the buttered moulds filling them only half full.

09 - After putting them in the oven for only 5 minutes, lower the temperature to 180C / 350F and continue to cook them for about an hour.

10 - The cakes are meant to be quite dark on the outside and soft inside. Unmold the cakes while they are still hot and let them cool before serving.