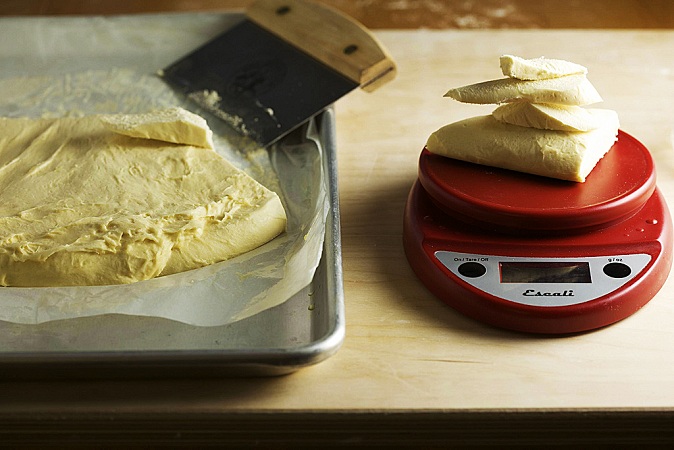 TRADITIONAL FRENCH RECIPE: Brioche is a pastry of French origin that is similar to a highly enriched bread, and whose high egg and butter content give it a rich and tender crumb. It is "light and slightly puffy, more or less fine, according to the proportion of butter and eggs."

It has a dark, golden, and flaky crust, frequently accentuated by an egg wash applied after proofing.

Brioche is considered a Viennoiserie, in that it is made in the same basic way as bread, but has the richer aspect of a pastry because of the extra addition of eggs, butter, liquid (milk, water, cream, and, sometimes, brandy) and occasionally a bit of sugar.

Brioche, along with pain au lait and pain aux raisins—which are commonly eaten at breakfast or as a snack—form a leavened subgroup of Viennoiserie.

Brioche is often cooked with fruit or chocolate chips and served as a pastry or as the basis of a dessert with many local variations in added ingredients, fillings or toppings.

02 - Meanwhile, cut the butter in little pieces to soften the butter.