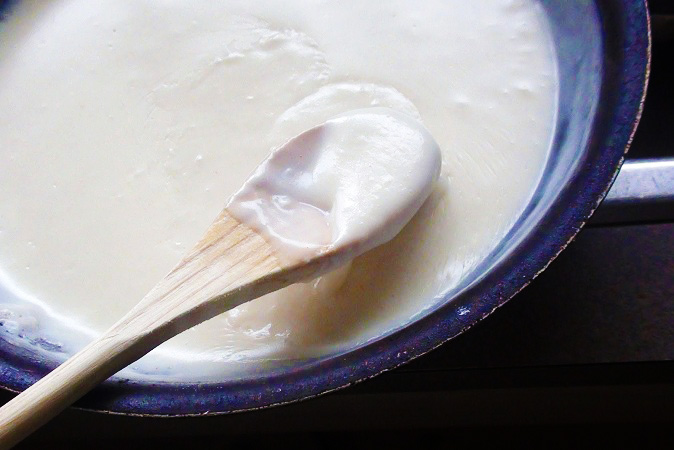 Béchamel is traditionally made by melting a quantity of butter, and adding an equal part of flour to make a roux, which is cooked under gentle heat while stirring with a whisk.

As it is a white sauce, care must be taken not to brown the roux. Then heated milk is gradually whisked in, and the sauce is cooked until thickened and smooth. The proportion of roux and milk determines the thickness of the sauce, typically one to three tablespoons each of flour and butter per cup of milk.

Salt and white pepper are added and it is customary in Italy to add a pinch of nutmeg.

Optionally a whole or cut onion, studded with one or more whole cloves, and a bay leaf may be simmered with the milk and then strained before adding to the roux.

Béchamel was a financier who held the honorary post of chief steward to King Louis XIV. The sauce first appeared in some Italian cooking books of the Rennaissance, but was introduced under its familiar name in Le Cuisinier François, published in 1651 by François Pierre La Varenne (1615–1678), chef de cuisine to Nicolas Chalon du Blé, marquis d'Uxelles. The foundation of French cuisine, the Cuisinier François ran through some thirty editions in seventy-five years.

The sauce originally was a veal velouté with a large amount of cream added.

02 - Whisk in the Flour until you remove all lumps. Let the mixture brown until the colour is just lightly golden.

03 - Pour the Milk in and mix until the sauce thickens.

04 - While you are still stiring, add a generous pinch of Salt and Nutmeg.

05 - Once the Béchamel Sauce is dense and lump-free, it's ready.