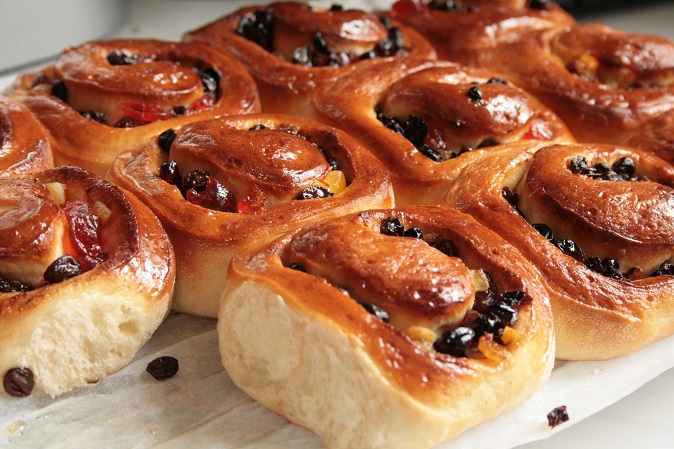 TRADITIONAL BRITISH RECIPE: Ok, here's the problem with cakes... they are sweet. So, if you have an obesity epidemic in your family, or if you are overweight yourself, this recipe will not help you. This recipe is as bad as fried chicken and burgers, but it's so freaking tasty.

The Chelsea bun is a type of currant bun that was first created in the 18th century at the Bun House in Chelsea, an establishment favoured by Hanoverian royalty, which was demolished in 1839.

The bun is made of a rich yeast dough flavoured with lemon peel, cinnamon or mixed spice.

Prior to being rolled into a square spiral shape the dough is spread with a mixture of currants, brown sugar and butter.

The process of making this bun is very similar to that involved in producing the cinnamon roll.

After being cooked traditionally the chelsea bun is glazed with cold water and sugar.

Normally, it is glazed while still hot so the water evaporates and leaves a sticky sugar glaze, making the bun much sweeter.

03 - In a separate bowl mix the Yeast, Caster Sugar to the Milk and stir until the Yeast is dissolved.

04 - Pour the Yeast mixture into the Flour and add the Egg. Mix well to form a wet Dough.

05 - Cover the Dough ( still inside the bowl ) with a cloth and leave in a draught-free spot to rise for about one hour until doubled in size.

06 - Once the Dough has doubled in size, mix in the remaining Flour with the Salt and knead on a worktop until smooth.

08 - Add the Butter into the Dough and knead well. Rest the Dough again for about 1 hour or until it has doubled in size.

09 - To make the Buns: place the Dough on a lightly floured work surface and roll to a rectangle measuring 30x45cm / 12x18in.

10 - Brush all but one inch of the shorter end of the dough with melted Butter and sprinkle some Demerara Sugar over its surface.

11 - Mix together the Sultanas, Spice, Citrus Zest and Ginger ( optional ) and sprinkle over the surface.

12 - Wet the shorter unbuttered edge of the Dough with Water, start rolling up from the other end, like a Swiss roll, and seal with the water-wet edge.

13 - Cut the long Roll into 12 smaller pieces and place in rows on the baking tray.

14 - Leave all buns to rest inside the oven ( switched off and not warm ) one last time for 30-60 minutes or until they have doubled in size.

16 - Bake until Golden and Puffed.