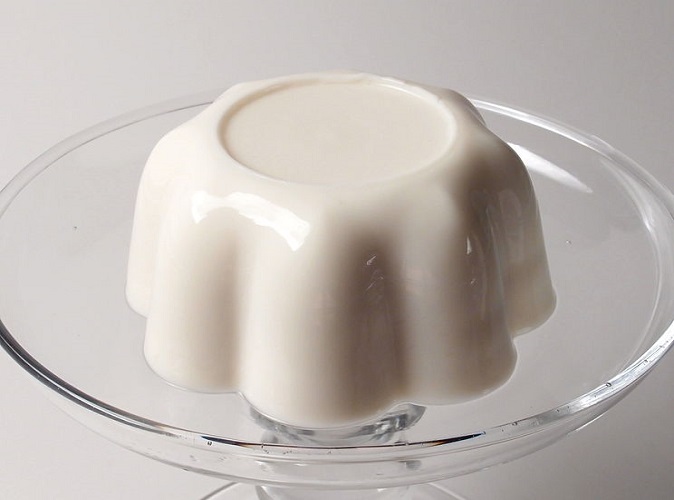 This is an easy recipe to make and enjoyed cold from the fridge.

The Blancmange is commonly made with milk or cream and sugar thickened with gelatin, cornstarch or Irish moss (a source of carrageenan), and often flavoured with almonds.

This recipe, will focus on a simple and plain traditional version, just to get you used to it.

Although traditionally white, blancmanges are frequently given alternative colours.

Some similar desserts are Bavarian cream, vanilla pudding (in US usage), panna cotta, annin tofu, the Turkish muhallebi, and haupia.

The historical blancmange originated some time in the Middle Ages and usually consisted of capon or chicken, milk or almond milk, rice and sugar and was considered to be an ideal food for the sick. Tavuk göğsü is a sweet contemporary Turkish pudding made with shredded chicken, similar to the medieval European dish.

01 - Place into a saucepan: one third of the Milk, Lemon Peel and Cinnamon Sticks and bring to a simmer over medium heat.

02 - Meanwhile, in a small bowl, whisk together the Cornflour and Sugar.

03 - Whisk the remaining Milk into the Cornflour Mixture.

04 - When the Milk in the pan begins to simmer, pour slowly the Cornflour/Sugar Mixture into the saucepan.

05 - Whisk vigorously and increase the heat just a bit to bring the mixture to a gentle boil. Allow the mixture to boil for about 20 seconds while continuing to whisk, then remove from heat.

08 - Pour into a dish or mould and refrigerate for at least 6 hours, or overnight.