TRADITIONAL BRITISH RECIPE: Let's be honest here, there is nothing better than the stingy smell of cinnamon, and this calls for just that. A light crisp crumble cake, with cinnamon, the perfect topping for a delicious British Apples cake. Ready to bake in about 10 minutes, this recipe can be made all year around. As far as you have apples. Although, you can swap apples for pears and add some nuts and honey on top.

To make the crumble you should use Bramley Apples, considered the best apples for cooking because of their balance between the sugar and acid.

02 - Peel, core and chop the Apples into chunky pieces, not too big nor too small and place them into a shallow breased baking dish, approx 23x18cm / 9x7in.

04 - Mix the Apple to combine with Sugar mixture.

04 - Put Flour, Sugar and Cinnamon in a large baking bowl.

05 - Cut the Butter into small pieces and add it to the bowl. Rub the Butter into the Flour and Sugar mixture until you have a very coarse mixture, without worrying too much about getting the mixture even.

06 - Sprinkle a good layer of Crumble topping over the Apples.

07 - Bake for about 30 minutes, or until golden. You will seen the Apples bubbling through from underneath.

08 - Remove the Cake from the oven and leave it to cool for 5 minutes before serving. 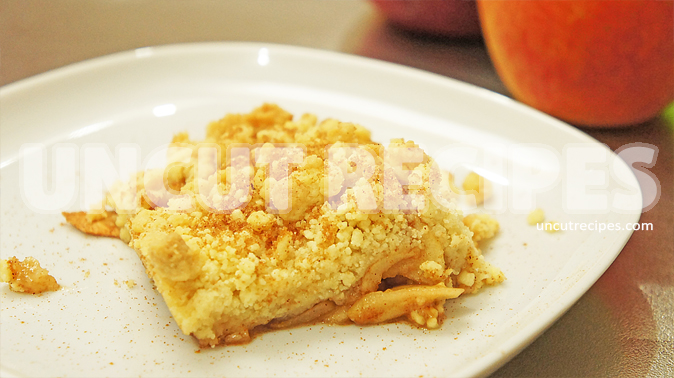 - If you are using an electic mixter, combine all topping ingredients together and mix until you obtain a rustic blumble mixture.

- When spreading the Topping over the Apples, try to work on a depth half that of the Apples, too thick won't cook.