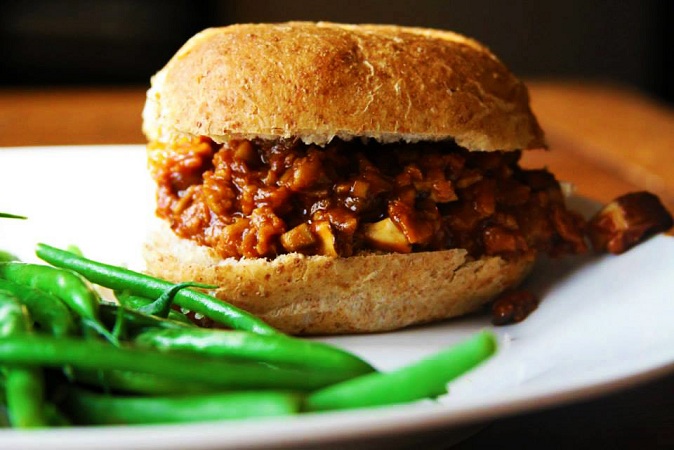 Marilyn Brown, Director of the Consumer Test Kitchen at H.J. Heinz in Pittsburgh, says their research at the Carnegie Library suggests that the sloppy joe began in a Sioux City, Iowa, cafe as a "loose meat sandwich" in 1930, the creation of a cook named Joe.

References to sloppy joes as sandwiches begin by the 1940s. One example is a 1944 Coshocton Tribune ad under the heading "Good Things to Eat" says "Sloppy Joes' - 10c - Originated in Cuba - You'll ask for more - The Hamburg Shop" and elsewhere on the same page, "Hap is introducing that new sandwich at The Hamburg Shop - Sloppy Joes - 10c."

The term sloppy Joe's had an earlier definition of any cheap restaurant or lunch counter serving cheap food quickly, since 1940 or a type of casual clothing.

Several variations of the sloppy joe exist in North America. In Quebec, Canada, sandwiches of stewed ground beef such as pain à la viande and pain fourré gumbo are usually served on hot dog buns. A similar sandwich, the "dynamite," exists in the area around Woonsocket, Rhode Island, and is distinguished by the use of onions, bell peppers, and sometimes celery.

Ground turkey or textured vegetable protein may be used as a substitute for ground beef.

In northern New Jersey, a sloppy joe is an unrelated sandwich made with a combination of deli meat, such as turkey, roast beef or especially ham, with cole slaw, russian dressing and swiss cheese on three slices of rye bread.

01 - Brown the Beef in a skillet over medium heat until it pours off fat.

02 - In a small bowl, mix together the Brown Sugar, Vinegar, and Mustard.

03 - Add this mixture to the Beef along with the Celery and Onion, and Ketchup. Stir together to combine.

04 - Sprinkle Flour over mixture and stir to mix well. If mixture is still not thick enough to your liking, add a bit more Flour until it is. Serve on Buns.